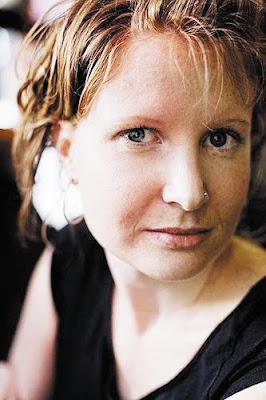 CAROLYN GILLES KNOWS HOW TO bring people together. In fact, she’s made it her job. In 2006, with support from a small cadre of friends and volunteers, Gilles founded Green Edge NYC to be a social network between businesses and residents wanting to live sustainably and in partnership with their neighbors and global community. A small staff of part-time volunteers now produces events to highlight people and organizations making an effort to be sustainable, local and green.
Just a few days ago, Gilles launched a new section of the web site — an extension of the site’s ongoing City Wide Supper Club pot luck concept — that allows neighbors to easily find other close neighbors interested in pot luck-ing and networking on a monthly basis. The page is divided by nabes in Manhattan and Brooklyn, and each group is responsible for finding a location and time to meet. For more about how this works, or to join a club, visit www.greenedge.ning.com/groups.
The next City Wide Supper Club is scheduled for Sunday night, Oct. 5, at Housing Works Used Books Café in SoHo. The potluck dinner begins at 6 p.m. (bring your favorite organic seasonal dish to share) and at 7:15 two speakers will talk about the life-changing experience of living and working on organic farms around the world in exchage for accomodations ($5 in advance, $8 at the door).
Green Edge coordinators produce other events, such as eco-tour scavenger hunts and, last month, a free, six-evening solar powered film festival featurings environmental documentaries, each night with a different theme such as water, energy, food and waste. On Oct. 19 LEDA MEREDITH will lead a foraging expedition through Prospect Park to spot, identify and sample the prolific edible fruit and foliage. The site also announces green events by other groups.
Envisioning the network first as a way for neighborhoods to come together, then for neighborhoods to connect to their city, Gilles hopes one day it will expand to be a place where cities can connect nationally.
“I thought Green Edge would be a fun way to get people motivated to make changes in daily lives, without being preachy,” she says.
Before starting Green Edge, Gilles was a sustainable gourmet food chef with general interest in the sustainable lifestyle. She moved to Park Slope three years ago.
“I had visited friends in Brooklyn and thought it was a neat community. I fell in love with it. I work here and live here, it’s a small little city in itself, and I was coming from Kentucky so it’s a good mix of urban and non urban for me.”
Gilles is also the driving force behind most events at the Slope’s Red Horse Café, (above which lives BILL WADMAN, the photographer who took Gilles’ photo). Gilles has applied her organizing talents to the café, where she has worked for a year, by initiating happy hours, live music Saturdays, rotating artist galleries, trivia night and the café’s blog.
And, as if she weren’t busy enough, she has just taken her event planning up a notch by accepting a new position as associate director of special events at Center for the Urban Environment.
For more information visit GreenEdgeNYC.org.
* * *
MORE NOTES ON PEOPLE: 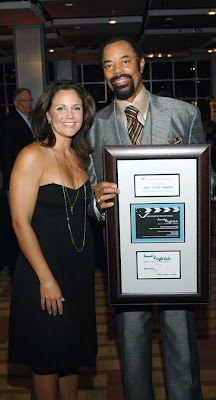 WITH MORE THAN 250 PEOPLE IN ATTENDANCE, Helen Keller Services for the Blind held its 32nd Anniversary Sound & Light Gala last week at Stage 6 at Steiner Studios in the Brooklyn Navy Yard. The organization honored two individuals for their significant contributions to the community — BRETT CRAIG, president of Transitions Optical, and basketball hall of famer, community activist and inspirational writer, WALT “CLYDE” FRAZIER.
Instead of the typical 3 minutes, Frazier gave an inspirational 20-minute thank you speech that members of the audience called “from the heart.” He described how when he was younger (as a seven-time NBA All-Star, and more) he received all different kinds of accolades but didn’t much think about them. Now, he said, when he receives an honor or award as he did from HKSB, it means a great deal to him. When he was finished, Frazier received a standing ovation.
“I had never seen anything like it before,” said DEBORAH RODRIGUEZ-SAMUELSON, director of resource development at HKSB. “Never. He moved people.”
Mistress of ceremonies MICHELLE CHARLESWORTH, co-anchor of WABC-TV, Channel 7, moderated the gala. Guests danced the night away to music and singing from the Hank Lane Band. More than $200,000 was raised for HKSB.
* * *
IN AN EVENING CALLED HOMETOWN STORIES, local authors MAUREEN McNEIL, of “Red Hook Stories,” and KELLY McMASTERS, of “Welcome to Shirley: A Memoir from an Atomic Town,” will read and discuss their work on Oct. 6 at 6:30 at the New School.
“Stories” is a collection of 20 short stories and 20 photographs depicting a balance of human loss and resiliency in Red Hook between 1981 and 1992. McMasters grew up in Shirley, Long Island, and her essays and articles have appeared in such places as the New York Times and Newsday.
The reading will be in Alvin Johnson/J. M. Kaplan Hall, 66 West 12th Street, room 510. Admission is $5 or free to those connected to the New School (students, faculty) with ID.
A second reading on Oct. 19 at Sunny’s in Red Hook will feature McNeil with fellow Brooklynite RICHARD FLEMING, author of “Walking to Guantanamo,” and DAVID ROTHENBERG, philosopher, writer, jazz clarinetist and author of “Thousand Mile Song: Whale Music In a Sea of Sound.” As the promo says, “This globe-traveling reading will transport us to the world of sound inside the world’s oceans, Red Hook back in the 1980s and across Cuba on foot.”