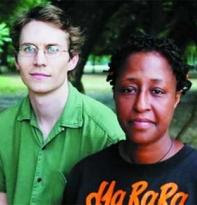 THE OTHER SIDE OF THE WATER is a revealing look into Haitian-American culture as it has manifested in Brooklyn — a rare glimpse into a world of music, spirituality and cultural activism. The film follows a group of young immigrants as they reinvent ancient Haitian music on the streets of Brooklyn in an experience that mixes carnival, Vodou (known colloquially as “Voodoo”) and grassroots protest, called “Rara.” Filmmakers JEREMY ROBINS and MAGALI “MAGI” DAMAS describe Rara as “one of the most breathtaking and contested forms of music in the Americas.”

Rara originally served as the voice of the slaves in their revolt against the French, and still is the voice of those struggling against ongoing dictatorships in Haiti. As “Other Side” follows Rara band Djarara through a landscape of Vodou temples, underground economies, violent politics and ground-shaking music, the central figures come to speak for a larger community.
In the words of the filmmakers: “This documentary focuses on the journey of the poetic visionary Pé Yves. Yves has led a Rara movement in New York for 20 years, through an era when the media [was] accusing Haitians of bringing AIDS to America, to times of civil chaos in Haiti, to police brutality riots in New York — each time re-imagining Rara as a voice for an evolving Diaspora. Yet when a new generation arrives bringing a radically different vision of the music, and the Haitian Christian community attacks Yves for promoting a Vodou ritual, he’s caught in the middle of a struggle for the meaning of Haitian identity.”
Director and co-producer Robins is the “outsider” of the production team — a non-Haitian, Greenpoint resident — who has long held a passion for visual storytelling. He has worked for PBS’ “POV” and more recently, on MTV’s “True Life.” Co-producer Magali (“Magi”) Damas is a Brooklyn native and Haitian, currently living in Harlem, who for 15 years has worked in video production, festival organization and civic activism. The team first worked together on Robins’ 2004 documentary, “The Cause of Pierre Toussaint,” which tells the absorbing story of a 17th-century former slave now being considered for sainthood by the Catholic church.
“Other Side” grew from a smaller project — originally Robins was documenting a single Haitian musician’s experience. “But I had long been interested in Rara, and Magi had been filming informally with this band, Djarara, for almost a year,” he said. “It was a way to explore the intensity of the hidden subcultures that make up the fabric of Brooklyn.”
In 2004, Damas co-directed a music video for Djarara, which was featured on the national cable broadcast of “Democracy Now!” She is currently the video coordinator for HaitiXchange.com. As an educator, Robins teaches production classes at Downtown Community Television. For 10 years he has worked with NYC public high school students to create documentary projects.
On Thursday, August 28, BAM Rose Cinemas will give “The Other Side of the Water” its big screen debut with screenings at 4:30, 6:50 and 9:15 p.m. A Q & A with Robins and Damas will follow the first two shows, with an after-party following the 9:15 show at Frank’s Lounge. Robins and Damas will take the film on to a modest film festival circuit.
Tickets will go on sale after August 15, $10, at www.bam.org.
POLITICS:
ISAAC ABRAHAM IS A MAN of many hats — most prominently as a spokesman for Hasidic Jews in Williamsburg, but also as a tenant organizer and occasional landlord’s advocate. He is often quoted in stories about Yankel Rosenbaum, the Jewish scholar whose life ended in the Crown Heights riots of 1991. And now he is running for City Council, supported, he says, by unsurpassed amounts of experience dealing with multiple branches of government.
“People kept selecting me,” he told the New York Times. “They’d say, ‘Isaac, I have a problem.’ I was the best messenger, or the best translator. I felt it was time to do it elected.”
Abraham’s goal is to snag David Yassky’s seat in District 33, which encompasses his home turf (but not all) of Williamsburg, Park Slope, Boerum Hill and Brooklyn Heights. He would make history, if elected, as the first Hasidic council member. Abraham will likely be facing Yassky’s former senior aide, Evan Thies; Stephen Levin, an aide to Assemblyman Vito Lopez; and a handful of other candidates.
What is Yassky’s take? “He’ll be a less compelling candidate than some of the others.” Time will tell.
IN OTHER NEWS:
Last year, Midwood resident Jodi Reznik received much media attention for her “Portraits of the Fallen Angels Project” in which she paints oil on canvas portraits of NYPD members who lose their lives in the line of duty, and presents them to the surviving families as gifts. On Monday, she will donate paintings to Masbia, the only kosher soup kitchen in New York, near Borough Park. The art will help decorate the walls and help the kitchen raise the $10,000 it needs each week to stay open and functioning.
“Few sights could be as satisfying as seeing the little ones eat up at Masbia just like other kids … this is a cause I want to be part of!” says Reznik.
Dr. Mark and Janet Rugg Lew, who run Brooklyn’s Lew Pediatric Center, will be serving meals together with Reznik and Rabbi Dovid Goldwasser.
“Hundreds of children enter our doors each month. Most have ailments that we can cure,” said Janet Rugg Lew. “We are proud to stand with these great New Yorkers in supporting the work of Masbia.”
* * *
JOSE PICO HAS A NEW JOB ONLY Coney Island could offer, for which the New York Times profiled him on Friday. The East New York resident and high school senior — newly christened “freak” — runs around a vacant lot in full pads to allow paying customers to shoot him with paintballs at “Shoot the Freak.” His twin brother, also a freak, trained him: “You run around and act freaky so people will want to shoot you more. Not much to learn.”
Not bad for $100-$200 a day, much better than his previous beauty supply store hourly gig — and possibly even useful for a wannabe police officer like Pico.