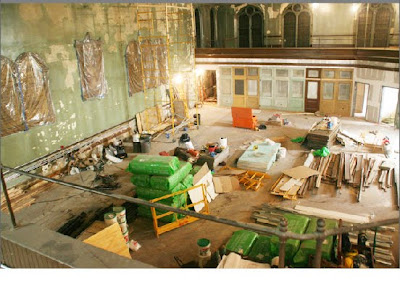 THROUGH YEARS OF CHRONIC UNDERFUNDING and without a permanent headquarters, Irondale Ensemble Project co-founders TERRY GREISS and JIM NIESEN remained tenaciously committed to their programs of social outreach and education, to bring theater to students who otherwise wouldn’t have such exposure. The company endured on the generosity of grants and on loaned space from the Department of Education.

Now — as of Oct. 11, officially — Irondale has a newly renovated, fully functioning and fairly spectacular home in which to plan, execute and stage its goals.

The new Irondale Center for Theater, Education, and Outreach fills the former Sunday school of Lafayette Avenue Presbyterian Church on South Oxford Street in Fort Greene. It hasn’t been used as a Sunday school, or used at all, since before World War II. A large portion of the $2.6 million remodel focused on installing systems such as HVAC and fire alarms to make it habitable.

“They knew how to build things back then,” said JOE McCARTHY, Irondale’s director of development, nodding to the original salvaged flooring and soaring ceiling during a recent walk-through. Stained glass dating to 1862 lets in warm light around the building, even into some of the smaller spaces now divided as administrative offices, dressing rooms and storage. “I bet that is the only storage room in the city with 1862 stained glass,” said Greiss of an empty room on the second floor — and, of course, he’s probably right.

Niesen and Greiss have a remarkable working relationship, with longevity rare for such an itinerant business. They met 33 years ago, at Greiss’ first professional acting job straight out of Sarah Lawrence. (“I haven’t even been married that long!” Greiss laughs.)

The two first worked together in 1975 at the State Theater of South Carolina, when halfway through a nine-month tour Niesen joined as a replacement. After the tour, Greiss joined Long Wharf Theater in New Haven — a top regional theater at the time — when it was seeking four young actors to be its permanent company and to perform school outreach. When a fourth person was still needed, Greiss suggested Niesen, who was hired on the spot.

“What we were doing there became the basis for Irondale.”

Another Long Wharf company member, Barbara Mackenzie-Wood, was the third founder of Irondale. She is now director of theater at Carnegie Mellon University, but returns often to visit.

Niesen mostly directs and Greis acts (and for 25 years was the sole fundraiser, until McCarthy joined the team earlier this year).

“Our aesthetic is the same,” says Greiss of his business partner. “We completely trust each other to do our jobs. If Jim makes what I think is a bizarre choice for a show, I will hold my opinion, and usually it turns out he is doing exactly what he needs to be doing.”

“Jim is almost a theatrical scientist. He calls himself a tinkerer, but I choose to call him a scientist. He understands the workings of theater better than anyone I’ve ever met. We shape it together, but he is the artistic vision of the company.”

Like Greiss and Niesen, Irondale Ensemble Project is a socially conscious entity with a political edge. The directors hope the new space will not only help them to bridge the gap between quality theater and Brooklynites of all ages and backgrounds, but will also provide an outlet for neighborhood tension. “We see the theater as a laboratory. It’s a place to problem solve and learn, confront issues facing the city and country. There is also a lot of change going on in the neighborhood, and some of that leads to discontent among longtime residents. We are hoping to provide an outlet for some of that through theater.”

Greiss says BAM has been “incredibly welcoming” to Irondale, the first new performance space of the BAM Cultural District. (This is the space Twyla Tharp almost occupied in 2001 before pulling out at the very last minute.) While BAM presents excellent work, Greiss notes, as a venue it is not available to most thespians, which is how Irondale offers something new.

“Theater classes are a literary tool,” he says. “The best way to learn — in your gut — the themes of lit is to use it in another way, and then it’s yours forever. No other art form does that as successfully as theater.”

Examples of this can be seen in the company’s outreach. Irondale currently works with four schools two days a week. One of those, Benjamin Banneker Academy, recently dedicated a classroom to be used as a black-box theater, and Irondale is helping with the conversion. Another important long-term program that was recently cancelled due to lack of funding took place at Rikers Island — Irondale worked with both men and women as part of an elective, high-discipline, boot camp-type early release program, which had proven quite effective. When the funding dried, the company was invited to stay at Rikers under a different capacity, working with the GED programs at Island Academy and Rosewood, teaching comprehension of literature through theater.

“Literature goes beyond the ability to read words on a page,” Greiss explains. “It’s about making meaning.”

Greiss and Niesen together lead the company in its daily rehearsals and performance work. The first production in the new center will be “Peter Pan,” a faithful, and thus a slightly dark, adaptation of the 1904 J. M. Barrie novel. Irondale’s housewarming party on Oct. 11 should be a hospitable affair. Performers from at least five companies will perform excerpts of their work. The Brooklyn Brewery and others will provide food and drink, and community leaders will stop by throughout the day.

“This is going to be a challenging year,” says Greiss. “The arts are constantly being challenged to prove their effectiveness. We are always trying to evaluate and improve and expand.”