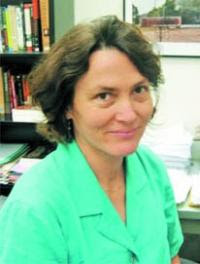 CUNY ENGLISH PROFESSOR CAROLE K. HARRIS has a few other passions in addition to French and American fiction. One of those, her photography of people, will be showcased Oct. 8 through Nov. 8 the Atrium Building of the Ursula C. Schwerin Library at City Tech.
A resident of Park Slope, Harris has been taking photographs since her grandfather gave her an old Brownie camera as a teenager. She is drawn to dilapidated landscapes empty of people and to distracted people “hanging out” in places of transition like train stations, bus stations and airports. She is intrigued by those who themselves are biding time in states of transition — teenagers, the elderly, children.
“I love observing how teenagers physically lean into their parents while waiting in line, and how the young fearlessly, flirtatiously or dreamily meet or ignore the eye of the camera,” she says.
The exhibit features three photographic themes — “Children Gazing,” “Hanging Out” and “Passing Worlds.” They look away from the camera and each other. While their stance might suggest that they don’t know each other, in fact they do. The pose they strike is one that reflects what Harris calls “the code of cool.”
“There are many ways to ‘hang out’ with friends in public,” says Harris, “and in each case the presence of the photographer reveals something about the relationship of the friends to each other. Their display of intimacy, slightly intruded upon, seems to be impacted by gender — the photographer’s and their own.”
Harris, who began teaching literature and writing at City Tech in 2006, specializes in 19th and 20th-century French and American fiction, and is currently writing a book on the topic of clichés in the work of Flannery O’Connor.
The show is on view Monday through Saturday, 10 a.m. to 6 p.m. Admission is free. For information on exhibit hours for Harris’ photographs, contact Library Professor Morris Hounion at (718) 260-5491. Professor Harris may be reached at (718) 260-5209 or charris@citytech.cuny.edu.
MORE NOTES ON PEOPLE:
IN MORE CUNY NEWS, ON NOV. 11, esteemed New York Times reporter JOSEPH BERGER will discuss his most recent book, The World in a City: Traveling the Globe through the neighborhoods of the New New York. The book is a look at “today’s polyglot and polychrome, cosmopolitan and culturally rich New York and the lessons it holds for the rest of the U.S. as immigration changes the face of the nation.”
Following the presentation, two accomplished New Yorkers and Holocaust survivors will be honored on the occasion of the 70th anniversary of Kristallnacht (The Night of Broken Glass): OLGA LIPSCHITZ, CEO of Brooklyn’s Cobble Hill Health Center, and Brooklyn-based legendary clothier MARTIN GREENFIELD, tailor to the stars and U.S. presidents.
The event, at Atrium Amphitheater at 1 p.m., is sponsored by The Jewish Faculty & Staff Association. For more info, call Albert Sherman at (718) 260-5837.