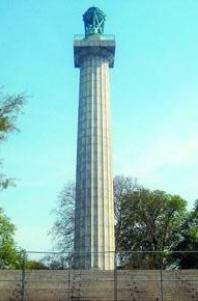 On Saturday, August 23, when the SOCIETY OF OLD BROOKLYNITES celebrates the centennial of “America’s First POWs” on the 232nd anniversary of the Battle of Brooklyn, it brings together several important pieces of Brooklyn history that many neighbors, particularly newcomers to Brooklyn, may not know.
First, the Society of Old Brooklynites, affectionately called ‘SOBs,’ was founded in 1880 to promote awareness of important Brooklyn history. The group is still here, actively educating and reminding other Brooklynites about their mission. SOB organized the Saturday tribute, to be held at Fort Greene Park at 10 a.m. Congressman Ed Towns will be there, as will noted historian Barnet Schecter, author of The Battle for New York.
Second, America’s first Prisoners of War were the tens of thousands of doomed Revolutionary War soldiers and some civilians who were held as prisoners on British ships off Wallabout Bay near the Brooklyn Navy Yard. Their entombed remains and their legacy lie in sacred trust inside the tall memorial column at the peak of the hill on Fort Greene Park. That column and the structure housing it are called the Prison Ship Martyrs Monument.
Ted General, newspaper columnist, historian and vice president of the SOBs, reminds us all that “It is especially important on the occasion of the 100th anniversary of the dedication of this historic monument to raise civic awareness about the ultimate sacrifices made by these Revolutionary War patriots.” General adds, “They were America’s first POWs, and they were martyred in pursuit of the cherished freedoms we all enjoy today.”
The program on Saturday, Aug. 23, will include stirring patriotic music, a Marine Corps color guard and uniformed American Revolution re-enactors. Any Brooklynite seeking a deeper appreciation of the rich lore of American history that lives on our streets should attend. It’s 10 a.m. at the corner of Myrtle Avenue and South Portland Street, at the entrance to the Prison Ship Martyrs Monument in Fort Greene Park.
Readers may also go online to www.brooklyneagle.com and search Society of Old Brooklynites or Fort Greene Park for more background.