People in the News

“Driving old-timey bluegrass with a message..” might be one description of the first music cd produced and performed by JONAH BRUNO, long a member of the communications department of the Brooklyn District Attorney’s office. Bruno, who has recently decided to practice law, worked as a journalist for many years while pursuing his passion for music as a band member and performer of bluegrass banjo. His first cd features a color sketch of Bruno by J.P. Peer ….. 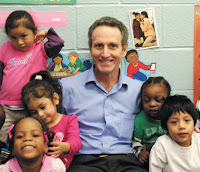 Over at 57 Willoughby Street, headquarters of the Brooklyn Kindergarten Society, Executive Director JIM MATISON and board members are looking forward to another successful Yuletide Ball on December 11. Held at the Heights Casino each year, the Yuletide Ball raises money for BKS and it’s vital role. Going back more than century, BKS has been dedicated to providing vital pre-school training to children in the borough’s most impoverished areas. This pre-school training has shown in studies to be an early deciding factor in whether or not a child becomes a productive member of society or gets drawn into welfare or criminal justice systems. An article in the Eagle interviewing Matison in early October was prompted by his disturbing comment that many states in the U.S. plan their prison construction ten years ahead, based on the reading scores of third graders. Eagle writer MARY FROST produced an article that helped clarify the critical role played by BKS. ( Readers interested in hearing more about the BKS Yuletide Ball should contact mnewman@bksny.org.)……

The seminal role played by the Civil War in American history is one of those subjects that continually fascinates historians, movie makers and lawyers—yes, lawyers. One Brooklyn-based lawyer who could be classified as an expert is MICHAEL CONNORS. He serves on the board of the Civil War Roundtable, which meets monthly in Manhattan. The programs include discussions led by noted authors and even road trips to historical battle sites. Recently when the Catholic War Veterans honored Connors as the Distinguished Veteran of the Year, he made a remark that bears repeating for younger generations. In an audience made up largely of veterans and a few grizzled ones who represented what Tom Brokaw called “The Greatest Generation”, Connors reminded all present that historically, “the U.S. military has freed more people than any other entity in history: it freed the U.S. from Britain’s tyranny, it freed the slaves and saved the Union, and it freed Europe.” While Connors did not make it part of his brief remarks that evening, he made it clear in other interviews that younger generations should develop an appreciation for the freedoms in which they bask today, and more deference to the sacrifices required to keep them…..

A CREDIT TO THE GENDER: Helen Keller Services for the Blind was actually founded in 1893 as the Brooklyn Industrial Home for the Blind, to provide services and training for the visually impaired–at that time there were industrial jobs that blind could be trained to do. In the late 20th century the agen

cy decided to rename itself after the heroic HELEN KELLER. The agency’s 2010 gala , held at Steiner Studios in the Brooklyn Navy Yard, was themed “honoring women who make a difference.” Honored were JILL ARKWRIGHT HARVEY , a financial analyst and asset manager, ABIGAIL BRESLIN, actress, MICHELLE CHARLESWORTH, broadcaster WABC, channel 7, and KELLY WATSON from KPMG. Among the women in attendance at the gala, author ANN EDWARDS, wife of THOMAS J. EDWARDS, the President of Helen Keller Services…..