Howe’s Brooklyn: Docu Crew Captures the Struggle On Both Sides of Mex-U.S. Border 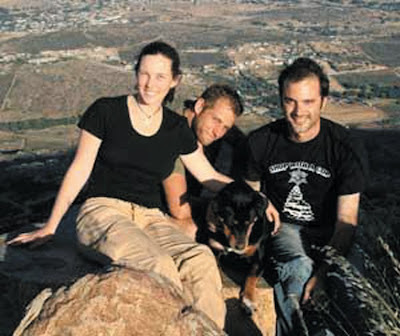 OVER THE WEEKEND, A DOCUMENTARY FILM CREW received a top prize in Paris at the Internews “Every Human Has Rights” Campaign awards ceremony. Brooklyn-based filmmaker JOHN DREW was part of the team that won for their film, Border Stories, which examined the lives of immigrants along the US-Mexico border.
The team of three (plus Rocky the security dog) decided to drive the length of the U.S.-Mexico border and search for human stories on either side. They selected this border because, says Drew, “it has the distinction of being the longest border between the ‘developed’ and the ‘developing’ world, and thus serves as an incredibly symbolic flash-point for globalization.”
They found filming to be a challenge given how violent certain border towns have become.
“Wielding your HDV camera around Ciudad Juarez, for example, just isn’t something you tell mom about. Of course, this reality represents why more critical attention needs be devoted to the region — innocent people die in places like Juarez every day and in some complicated and under-reported ways, U.S. policy shares the blame.”
CLARA LONG, a journalist whose work has appeared on National Public Radio and in the Associated Press, with filmmaker BEN FUNDIS and Drew, co-founder and former associate editor of New York-based magazine The Citizen, all shared roles in capturing the stories now available on their web site (borderstories.org). It took them four months to reach Tijuana from the mouth of the Rio Bravo. Because this type of investigative commitment is difficult to finance, Drew said, they probably would have stayed longer had the budget allowed for it.
The mosaic documentary consists of more than 20 two- to five-minute video vignettes. Although they are in the process of editing the footage into a feature, they plan to keep the Internet as the primary distribution vehicle in order to reach as many people as possible. Drew adds that because they feel the shelf life of documentaries — especially those without sex and glamour —is typically very short, the Internet provides an open avenue to contribute as much as possible to the various US-Mexico border debates.
One touching story that illustrates some of the complexities of the issue is that of Jose Rivera, born in Mexico but raised and educated for 18 years in the U.S. After a scuffle with a friend, the police who picked them up turned him into U.S. Customs when he couldn’t provide a Social Security number. Now in Nogales, Mexico, he appears in limbo, unable to return to the states. He doesn’t know his family in Mexico, nor where they live. His mother, still in the U.S., has offered to find a way to help him cross back. He is not interested in that approach. He says, distractedly, forlornly:
“I never really felt illegal. You know, I felt like I was just another teenage American, ’cause that’s how I was raised. But just recently I found out that’s not how it is at all. I guess this is where I belong, right. According to them.”
Other videos portray the opposite side of the story, including one layman minuteman border patrol who explains he is “helping the people who are just trying to enforce the law.”
Border Stories plans to return each year in search of additional stories that put a human face on the “complexities, tragedies and failed policies” that define the region.
“Quite simply, U.S. immigration policy is in a failed state, and until more people learn why, Border Stories has its work cut out. Having said this, as soon as we can obtain additional financing, we’ll be back at the border’s hot spots and its not-so-hot spots, since it remains a cat-and-mouse game, and we will continue to post new stories to the site.”
The Dec. 6 award ceremony in Paris, marking the 60th anniversary of the Universal Declaration of Human Rights, was attended by world leaders such as Kofi Annan, Jimmy Carter and Mary Robinson. Visit borderstories. org to watch clips and to sign up for updates.