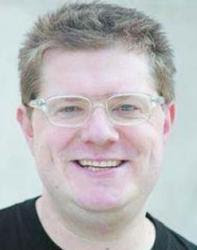 Josiah McElheny
Photo courtesy of the Macarthur Foundation
One among us has been named a genius. Carroll Gardens resident JOSIAH MCELHENY was awarded the prestigious MacArthur Fellowship last week. The sculptor and master glassblower will receive half a million dollars, paid out in increments of $100,000 for the next five years.
Popularly known as the “Genius Award,” the fellowship honors talented individuals across a number of disciplines, including scientists, entrepreneurs, teachers and writers. Last year, in an interview with PBS’s Art: 21 series, McElheny was asked about the sources that impact his work. He responded, “ Some people have asked me whether I have any desire to do something original. I often explain that a lot of my work, all of my work, is derived from some previous source at some level and that what I’m doing is re-imagining something or shifting or transforming it slightly but always very much in connection to its source.
“I’m of the generation that doesn’t really believe in originality. It’s never occurred to me — this idea of ‘originality’ being important.”
His 2003 piece, “Modernity, Mirrored and Reflected Infinitely,” is part of MOMA’s permanent collection.