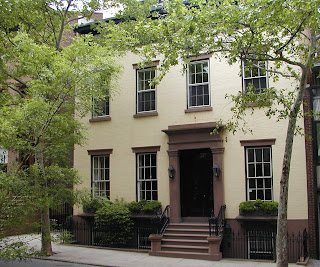 In the fall of 2010 many Brooklyn friends of BAM, including Chairman Alan Fishman,gathered at this famous house—70 Willow Street—to celebrate the impendingfive-year partnership with American Ballet Theatre.ABT would be coming to BAM each holiday, it was announced, to present the exciting new choreography ofAlexei Ratmansky’s Nutcracker. The dinner at 70 Willow Street, hosted by Claire Silberman and Stuart Leaf, was designed to bring together Brooklyn-based support for the ABT/BAMNutcracker partnership. Inattendance were many leaders , past and present in the arts world.Kevin MacKenzie, Artistic Director of ABT , gave a stirring speech about the power of Ratmansky’s vision, and noted that ABT and BAM had actually worked together in the past.But it was the presence of Seth Faison, former chairman of BAM who had recruited and hired the legendaryHarvey Lichtenstein, that reminded all present of the significance of 70 Willow Street. It had been for many yearsthe home of ABT co-founder and set designerOliver Smith. Faison could recall personally the collaborations with ABT and BAM in the 1960s, when Oliver Smith, in the very same house, had hosted parties similar to the one last fall. (Indeed, the current 2011 ABT season at the Metropolitan Opera House features a popular Coppelia, with production notes in the program that refer to a premiereat BAM in December, 1968, danced by Carla Fracci andReik Bruhn.)

Many weeks after that ABT/BAM party in Brooklyn last fall, a benefit and premiere of Alexei Ratmansky’s Nutcracker filled BAM’s Opera House , to great acclaim—and great expectations about this renewal of an ABT/BAM partnership in the future.This December the production will begin earlier in the month than last year, allowing more New Yorkers to visit BAM before a traditional holiday exodus. ABT’s Acting Development Director Mimi Bradley, who happens to live near BAM in Fort Greene, will be working overtime on this project starting right now.(On another note, and another Brooklyn connection, ABT’s stalwart Stage Manager Dathan Manning, who lives in Brooklyn Heights, may be retiring this year….Brooklyn neighbors, with nostalgic chauvinism, hope he will stay around long enough to run backstage at BAM for the December Nutcracker.)

Scaling the Heights
Another view of Nature’s Fireworks