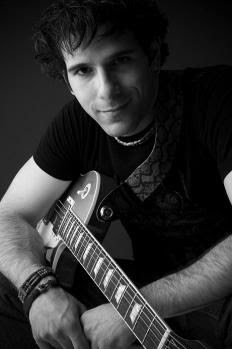 A HANUKKAH SPECIAL ON PUBLIC TELEVISION next week will feature two standout local talents well-known in the Jewish music scene. Lights! Celebrate Hanukkah Live in Concert, hosted by international Jewish musician CRAIG TAUBMAN on WLIW21, includes Brooklyn-based multi-instrumentalist JOSH NELSON and Park Slope-residing singer/songwriter MICHELLE CITRIN.
Five-foot one-inch Citrin packs a punch, according to her devoted and growing grassroots fanbase following her extensive touring across the U.S., Australia and Israel. Her YouTube videos “Rosh Hashanah Girl” and “Twenty Things To Do with Matzah” have nearly a million hits combined. She has been described as having the “honest lyrics of the Indigo Girls mixed with the smooth style of Norah Jones plus dreadlocks — the lil grrl, with a big sound.”
Multi-instrumentalist Nelson is described on his web site as “one of the most popular performers and producers in modern Jewish music.” His group, the self-described “high-octane” Jewish rockers, The Josh Nelson Project, is compsed of “five of the most talented performers in the United States [and] each musician is young, Jewish and a positive role model.” Nelson will perform “I Have a Little Dreidel.”
The special premieres on Wednesday, Dec. 3, at 8 p.m. (preceded by a half-hour segment of WLIW’s Visions of Israel). WLIW21 will rebroadcast the concert on Dec. 7 at 5:30 pm as part of its Jewish Heritage Celebration broadcast airing from 1-7 p.m., which also includes The Jewish People: A Story of Survival (1 p.m.), Visions of Israel (2:30 p.m.) and The Jews of New York (4 p.m.). For a preview of the special, visit wliw.org/Hanukkah.
* * *
MORE NOTES ON PEOPLE:
Brooklyn College Radio station WBCR (1090-AM) recently celebrated the station’s 40th birthday with faculty, staff and students both past and present.
Certain alumni who worked at the station when enrolled in Brooklyn College, said the station’s faculty advisor, assistant professor MARK BOUTROS, are some of today’s top names in local radio.
One of those is SCOTT A. HERMAN, ’80, executive vice president of operations at CBS Radio. In a written statement read at the party, Herman said he views WBCR as his “first job in radio.”
Another illustrious alumnus who remembers his days at WBCR fondly is SKEERY JONES, currently executive producer at Z100 Radio (100.3-FM) and producer of the highly rated station’s flagship program “Elvis Duran and The Z100 Morning Show.” Skeery frequently supports his alma mater with campus visits and “shoutouts” on his blog and myspace page. (To his fellow classmates in the Brooklyn College Class of 1980, Boutros revealed, Jones is better known as Anthony Scire.)
Brooklyn College began offering students radio courses in 1948, said Boutros. “In those days radio courses were offered by the Department of Speech,” he said.
WBCR is student-operated and now supervised by the Brooklyn College Department of Television and Radio. The department offers majors in Television and Radio production and Broadcast Journalism.
“The station’s first home was in James Hall,” said Boutros. “It moved to its current location in Whitehead Hall during 2003-04, thanks to a generous gift from radio legend HIMAN BROWNE.”
Browne, a ‘34 graduate of Brooklyn College, became a radio legend during the glory days of radio. For a number of years he was a director and producer of programs with CBS Radio.
WBCR can be heard on campus by tuning to 1090 AM or by going onto the Internet and clicking onto www.brooklyncollegeradio.org.
“We’d like to add on educational programming from 8 a.m. to 11 a.m. weekday mornings,” added Boutros. “If anyone has an idea we’ll be glad to hear it.”
* * *
EMMY AWARD-WINNING WABC-TV NEWS ANCHOR SADE BADERINWA will speak to budding journalists as part of the Young Journalists In Training Program at St. Francis College on Tuesday morning Dec. 2. The event is free and open to the public.
In July, 2004, while preparing a report on location in Hackensack, NJ, about local flooding, Baderinwa was struck by a hit-and-run driver. After multiple surgeries and physical therapy, she returned to Eyewitness News in December of ’04.
WABC’s DIANA WILLIAMS has also spoken as part of the lecture series and WCBS Reporter JAY DOW is scheduled to appear in the coming weeks.
* * * NYC ARTIST ANDREA STRONGWATER has been painting since she was tiny. On Dec. 4, at 7:30 p.m., she will be speaking about her project “Old European Synagogues” at Congregation Mount Sinai in Brooklyn Heights.
Strongwater has recreated images of synagogues that were destroyed during WWII. During the evening there will be a question and answer session and custom made prints will be available for sale. Wine, cheese and dessert will be served. The $10 admission fee goes to the synagogue.
* * *
Air Force Airman TIMOTHY J. SULLIVAN, a 2005 graduate of Brooklyn’s St. Edmund Preparatory School, has graduated from basic military training at Lackland Air Force Base, San Antonio, Texas.