WITH THE “YEAR OF HOMECOMING” just around the corner, Scotland’s Minister of Culture LINDA FABIANI is in New York to encourage everyone with an affinity for Scotland to “come home” as the country celebrates the 250th anniversary of the birth of “Scotland’s favorite son” poet ROBERT BURNS.
As Scotland’s unofficial but universally recognized national poet, Burns is a figure of massive cultural influence. He is the author of many poems and songs, including “Auld Lang Syne.” 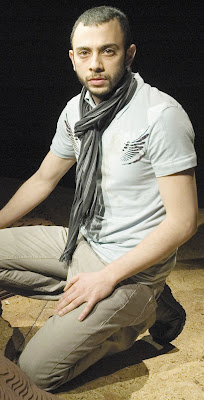 One of Fabiani’s visits last week was to Israeli-born, Brooklyn-based artist ITAMAR JOBANI to see his Robert Burns-inspired project. Next year, Jobani’s piece, “Nightly Encounter,” will be displayed in Scotland as part of “Inspired” — an international exhibition celebrating the life and work of Robert Burns.
Jobani writes about how this piece was inspired by the theme of Burns’ song “Tam O’Shanter”: “In this song, Burns tells the story of a countryman, Tom, and his nightmarish road back home from the pub. I was stunned by the powerful graphic images that Burns describes in that song and also by his ability to lift an everyday accident to a colorful scene.”
“I was also moved thoroughly by the song ‘To a Mouse,’ and by the way Burns contemplates the human condition through a simple encounter with a mouse. In the installation ‘Nightly Encounter,’ I’m trying to recreate this magical transformation that I found in Burns’ writing. A man stands in a furrow of a rural field, having a short break from plowing or maybe just looking at the land, and creating his own enchanted vision. Although the vision is his own, it is so vivid and intriguing that everyone who watches it is given the power of his imagination.”
The installation includes a figure holding a video projector over a pool. Both the figure and the pool are made from hundreds of wood layers in the technique of topography models. The projected video resembles muddy green water that ripples out from a fixed point directly beneath the projector. The wooden figure is “reflected” in the water, but the image is of a real man who resembles Robert Burns. In the distant background, an old building looks like a church with its tower on fire. 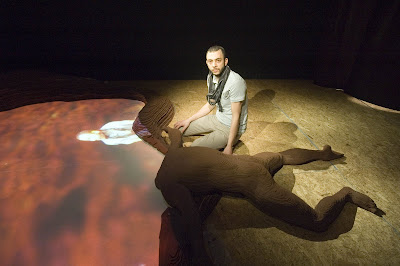 The installation is also interactive: a camera captures and reflects the video of visitors looking at the pool, and their movement creates ripples on the projected images.
“It is amazing to see that almost 250 years after his birth, Scotland’s national poet is providing artists all over the world with inspiration,” says Fabiani. “I look forward to seeing Itamar Jobani’s completed work alongside others in Glasgow next year.”
“Inspired” curator SHEILAGH TENNANT added: “When I began to speak to artists about the idea of the show, I was overwhelmed by the response — to date we have well over 40 artists involved, several from outside the UK including Russia, Israel, Australia, Japan and the US.”
Fabiani will also attend a performance of the National Theatre of Scotland’s critically acclaimed The Black Watch, as well as hosting a reception for guests afterwards.
For more information about the artist visit www.itamarjobani.com.
PRATT INSTITUTE ALUMNUS AND ARTIST JOHN POWERS ’98 spoke at Pratt about his artwork and career as part of the 2008-2009 Visiting Artists Lecture Series on Oct. 21. A Chicago native who resides in Brooklyn, Powers discussed his geometric sculptures, installations, drawings and paintings that reference fine art, pop culture and fantasy. A focal point of the conversation was “the tension between man and machine that has defined much of the last 50 years of American art.”
Artists slated to speak during the Fall 2008 Visiting Artist Lecture Series include Brooklynite LUIS GISPERT on Nov. 4, HANK WILLIS THOMAS on Nov. 18, and JEANNE SILVERTHORNE on Dec. 2. The series is coordinated by graduate students ODED HIRSCH and CHARLOTTE MEYER under the supervision of Professor DOMINIQUE NAHAS in the Department of Fine Arts.