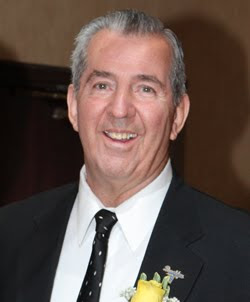 When a civic association celebrates “83 years of democracy in action”, it’s a testament to the strength of the association that many of its leaders have been around for that long. Well, not quite that long. Last Thursday the Dyker Heights Civic Association honored James F. Clark at its annual Testimonial Dinner at Sirico’s on 13th Avenue. When the welcome speech was given by Mafaldo DiMango, let’s just say the she and Jim Clark, combined, could have boasted more than 100 years of community service as adults in Dyker and Bay Ridge. While the legendary Mafaldo chaired the dinner and served as 1st Vice President of the Dyker Civic Association, it was Jim Clark’s night , and the spotlight shone brightly.

More than 120 people attended to support the association and honor Jim Clark, and official proclamations came from numerous elected officials, including Congressman Grimm, Assemblyman Abbate, State Senator Golden, Councilman Gentile and Borough President Marty Markowitz, with a special message delivered by Carlo Scissura (sp?) . As one observer said later, “The evening was peppered with praise for salt of the earth,” referring to Jim Clark’s quiet and steady devotion to whatever the job at hand might be.

Clark, born and raised in Bay Ridge, attended OLA (Our Lady of Angels School) and LaSalle Academy before joining the NYPD in 1961. After retiring in 1984 he joined Flood Company Real Estate, where he eventually became VP and general manager—a position he still holds today. What makes his star shine so brightly in the community is a record of steady, unwavering service to a number of organizations. One member of the Fifth Avenue BID (Business Improvement District) did not want to be named because “What I say about Jim might seem to diminish others, but I have to say it: very few people would have the patience and stamina to work as hard as he did to get that BID done…he is ‘the quiet general’ who sees things through to the end.”

In business leadership, Jim excels naturally. He was vice president with the Fifth Avenue Board of Trade, a private organization of business owners, when in 2006 it was decided that an official city Improvement District structure would improve sanitation, security and capital improvements. But the city paperwork and approval process—getting oks from landlords and business owners—took long hours of patient lobbying and organizing. Jim led the effort and was named president when the BID came to fruition in July 2007. He remains the president.

As a business leader in his chosen profession, Jim remains active in many organizations he once led as president: Brooklyn Board of Realtors, Bay Ridge Real Estate Board and Bay Ridge-Bensonhurst Multiple Listings Service. In the pro bono public area, he was a charter member of the Ragamuffin Parade and is currently vice president and Merit Badge Counselor with the Brooklyn Council of Boy Scouts of America.

Jim Clark’s leadership in the community where he lives and works has been called “pervasive, enlightened and often completely in the background” by one admirer. “He doesn’t want to be president of this or that, he doesn’t seek the spotlight. But he DOES want to lead, and he does that with the highest ethics and common sense.”

Legendary Show Biz Star Comes Back to Life Via Finkels
When written word turns to music: A night at BAM