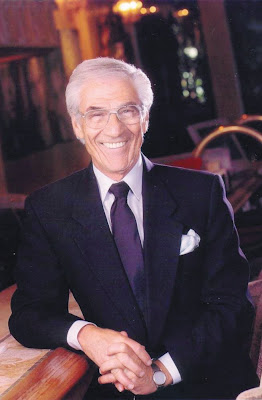 BROOKLYN-BORN MEL HABER still doesn’t know how to cook a steak or mix up a drink, but he has under his belt decades of entertaining the crème de la crème in Palm Springs.
Although he made “every mistake in the book” after pulling up his Coney Island roots and heading for the desert, he has been wildly successful in his hospitality pursuits. As operator of six different restaurants — including the legendary Melvyn’s Restaurant, which he built, and the historic Ingleside Inn, which he restored — he has played host to Frank Sinatra, Bob Hope, Marlon Brando, Lucille Ball, Rita Hayworth and more. He still owns both establishments.
The host’s new book, Palm Springs a la Carte: The Colorful World of the Caviar Crowd at Their Favorite Desert Hideaway (Barricade Books), describes the adventures of a novice restaurateur and hotelier. The book is filled with entertaining stories that offer a peek into the colorful world of celebrities, Hollywood elite, royalty and Mafioso.
These days, it is reported that you may spot Arnold Schwarzenegger and Maria Shriver, Sylvester Stallone, Cher, Kurt Russell and Goldie Hawn, David Hasselhoff, Barry Manilow or Donald Trump enjoying themselves at the inn.
Haber feels his story should be an inspiration to everybody, because as he says, “If I can make it, anybody can.”
Haber is also the president of the Angel View Crippled Children’s Foundation and has served on its board for 25 years, the last 15 as president. He now calls Rancho Mirage, California home.
* * *
MORE NOTES ON PEOPLE:
TO CELEBRATE THE SHOW’S FIRST BIRTHDAY, the hosts of THIRTEEN’s REEL 13 — the Saturday night classic movie followed by a short — will interview actors from the Jan. 10 line-up prior to airing them that evening. Brooklyn native MARTIN LANDAU will share anecdotes with REEL 13 Classics’ host NEAL GABLER about Hitchcock and the shooting of the cinematic masterpiece, North by Northwest. Tune in at 9 p.m. to hear him discuss his controversial decision to play his character assassin, Leonard, as gay — “otherwise he would have been a henchman” — and the changes in the script that were made because of his choice.
The legendary actor will also reveal some backstage gossip about the debonair CARY GRANT and tales about the notoriously mischievous Hitchcock. He also discusses his most recent project, Lovely, Still, about love between septuagenarians.
Born in 1931 in Brooklyn, Landau graduated from James Madison High School and Pratt Institute. Before entering show business as an actor, Landau was a cartoon artist at the New York Daily News. He has a place of honor on the Brooklyn Celebrity Path at Brooklyn Botanic Garden.
Landau’s rich acting career has earned him accolades, including a best supporting actor nomination in 1988 for his portrayal of Abe Karatz in Tucker: The Man and his Dream, again in 1989 for his part in Crimes and Misdemeanors and in 1994 a win for best supporting actor in Ed Wood.
* * *
PROFESSOR SETH WEINER of Pratt has received not one but two New York State Council on the Arts (NYSCA) grants for work that bridges fine art, design and technology: one “Independent Projects Grant in Architecture, Planning, and Design” and one “Individual Artists Grand in Film/Video/New Technology.”
Weiner plans to use the first for a project titled “Mutable Architecture.” The project consists of a house structure constructed of “switchable” glass, which possesses a liquid crystal film that can switch from clear to solid white when electrically charged. In its opaque state, the glass doubles as a projection surface, which will hold images reflecting the project’s “environmental, geographic and social contexts.”
He will put the second grant toward a project — of intriguing but dubiously useful nature — titled “Out of Order,” which will convert a pay phone booth into a “lava lamp” of unpredictable motion patterns that will be tracked by a computer system and used to create highly secure secret passwords similar to those used to log onto wireless networks.
Weiner, who works in public art, new media and sculpture, has taught at Pratt since 2006. He holds a fine arts degree from Rhode Island School of Design and received a master’s degree from Massachusetts Institute of Technology. He lives in Brooklyn.