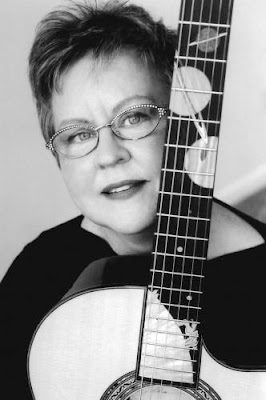 POLITICALLY-MINDED NEW YORKER AND SINGER/SONGWRITER CHRISTINE LAVIN will be the next act in First Unitarian’s First Acoustics series on Jan. 10. Known for her sense of humor, evident in her lyrics and onstage performances, Lavin has produced 18 solo cds and more with friends under the name Four Bitchin’ Babes. Her songs have been performed by such diverse artists as Broadway’s Tony Award-winning actress Sutton Foster.
One of her most requested songs, “Amoeba Hop,” has been turned into a children’s book (Puddlejumppress.com) with scientifically accurate illustrations by artist Betsy Franco Feeney. According to Lavin, the book won a “Best Book Award” by the American Association for the Advancement of Science. “I wrote the song in the early 1980s, but it was inspired by my first look into a microscope in Mr. Kristoph’s 9th grade biology class,” recalls Lavin on her publisher’s web site. “Classmate Betty Ann Murphy brought a bucket of swamp water into the classroom and when I looked at what was going on down there, I was stupefied!
“Over the years, I’ve received cards, drawings and letters from teachers and elementary school students who have been inspired by the song,” she says.
Tickets to the show are $25.
* * *
MORE NOTES ON PEOPLE:
PRATT PROFESSOR ROB O’NEILL recently released a new textbook for students and professionals interested in film and video game character development. Digital Character Development: Theory and Practice provides an overview of animation and video game digital character development, interviews with leading technologists and animators and a theoretical overview of current character. This is no light reading. O’Neill has taught in the Department of Digital Arts at Pratt since 2004 and serves as acting director and research associate at the institute’s Digital Arts Research Laboratory. He is also founding partner of Kickstand Animation Research + Design, and has worked as a character technical director at PDI/Dreamworks on “Shrek 2” and “Madagascar.”
FUSION DESIGNS GALLERY, which displays and sells the work of LEO DILLON, DIANE DILLON and their son LEE DILLON, opened early in December at 140 Atlantic Ave. The first show at the newly opened gallery is “Shakespeare Covers of the 1960s.”
Fusion Designs Gallery is owned and run by partners Lee Dillon and GREG SCHMITZ, who launched Fusion Designs in 2001. After partnering with the award-winning illustrator team that is Lee’s parents in 2002, the company expanded its offerings to include fine art and limited edition prints.
EVER WANTED TO CRACK THE HARD exterior of the production industry, but didn’t quite know how to begin? On Jan. 15, hear how it is possible from a panel of young New Yorkers as they offer first hand accounts about starting careers in TV and film production with the help of the “Made in NY” Production Assistant Training Program — a program that provides job training for those who otherwise lack access to the production industry.
Developed in partnership between the Mayor’s Office of Film, Theatre and Broadcasting and nonprofit Brooklyn Workforce Innovations (BWI), the mission of the “Made in NY” PA Training Program is to give unemployed and low-income New Yorkers the chance to work on New York sets and build careers in the dynamic field of entertainment. PAs go through a free, intensive four-week skills training program taught by NY industry professionals. After certification, PAs receive two years of job placement and career advancement support, provided by BWI.
Since its launch in 2006, the program has certified 149 PAs who have worked on productions such as “America’s Next Top Model,” “Fringe,” “Gossip Girl,” and more.
“The program definitely changed the direction of my life,” said MAYA THOMAS, a certified PA now working on commercials and television. “I knew I could do it, but before I just saw doors closing. It’s easier to walk through the doors when people believe in you.”
“New York City is home to a thriving production industry, employing 100,000 New Yorkers and generating $5 billion to our economy each year,” said KATHERINE OLIVER, commissioner of the MOFTB, who will be moderating the panel.
“We know there are many young New Yorkers ready to work hard and make their contribution to the industry, but they don’t know where to start,” said KATY FINCH, program director. “If you think a career in film might be right for you, we encourage you to come to the panel.”
“‘Made in NY’ Production Assistants: A Peer to Peer Discussion” at the NYC College of Technology in Brooklyn, is free and open to the public at the NYC College of Technology, Room AG30. Seating is limited. RSVP to message@film.nyc.gov by Jan. 13. Doors open at 5:30 pm. For more information about these programs, visit www.nyc.gov/film.