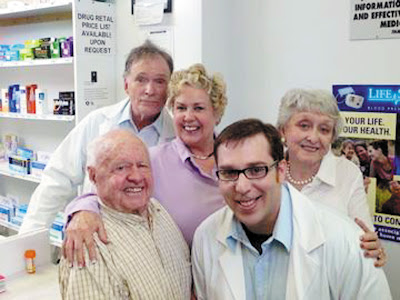 MEET CLARK KENT AND HIS ALTER-EGO SUPERMAN, or in this case “Movieman” KEITH BLACK — a self-proclaimed Woody Allen/Harvey Weinstein combo who is a math teacher by day at Sheepshead Bay High School. His new movie, Driving Me Crazy, which he co-wrote with screenwriter MARK TROY and is self-producing, is progressing slowly but surely. The film is directed by comedian and Brooklynite STEVEN MARSHALL and stars several Hollywood heavyweights: Mickey Rooney, Celeste Holm, Joe Bologna, Renee Taylor, Mary Hartman, Dick Cavett and Louise Lasser, all of whom, inspired by Black, agreed to work pretty much for free.
“I enjoy writing a movie and telling a story with some sort of life lesson and using my comedic persona to explore the conditions of that particular scenario,” says Black, “whether it be a quest for love, coming to forgive your parents, coming of age, overcoming your fears — all topics that I explore in Driving Me Crazy.”
The film is about “a neurotic pharmacist who falls in love with a woman on the West Coast” through the Internet. He takes a road trip to meet her, and his passenger, the woman’s sister, subsequently drives him crazy.
Black’s first film Get the Script to Woody Allen (2004) presented similar themes, as well as the writer’s charming neurosis and high-anxiety comedic talent. That year it won the Long Island International Film Expo for best short film.
This time, however, Black ran out of money mid-movie, triggering him to look on the bright side and sing a song.
“I decided to sing about my miracle of getting all these stars to star with me and combined that concept with the miracle of Hanukkah — and came up with ‘The Other Hanukkah Song.’”
Although he is “totally broke,” Black says he is feeling better than ever. While the movie is still progressing, the song has earned airtime — this morning, Dec. 19, on WOR’s The Joey Reynolds Show, and it will play again on every day of Hanukkah beginning Dec. 22 for eight days on Long Island’s WHLI.
Despite his success, he has no desire to leave his students and says they come first.
“In a way, teaching is similar to making movies and writing. High school students can be a tough audience, and you have to be able to create a hook to get your audience [the students] to stay engaged — this is done by coming up with engaging lessons and creating an atmosphere where there is fun, so learning can be cultivated,” says Black.
When confronted by skeptics, Black simply says, “Told by everyone, I’m never going to make it, I looked them in the eyes: Oh, I’m going to make it. I’m the ultimate outsider.”
See the trailer at www.drivingmecrazymovie.com.
* * *
MORE NOTES ON PEOPLE:
Brooklyn Women’s Exchange manager KATE ROCK makes sure the scarves are in order.
BROOKLYN WOMEN’S EXCHANGE at 55 Pierrepont unveils new merchandise in the last month of each year. The most popular items are ornaments, baby items and scarves and wraps.
“We have generations of local buyers,” says volunteer SADIE HORTON. “A mother will buy for her child and then for her grandchild.”
Rock says, “We do a great deal of special orders. If someone likes the pattern of a wrap, but prefers a tablecloth, the consignor will often make it.”
“One of the most interesting elements of the store is meeting the consignors who are not mainstream,” Horton adds. “They are on different life paths.”
The Exchange ships for customers and has increased holiday hours: weekends 10-4:30, Thursdays 11-7 and all other days 11-6.
THE NATIONAL GUIDE SERIES “Where the Locals Eat” has released its most ambitious book to date, for New York, with a large contigent focused — where else — on the culinary bounty of Brooklyn.
New Yorker and publisher BILL KING says about the process: “We know that neighborhoods in Brooklyn are distinct, and the area is a true mecca for the arts, shopping and dining. In fact, we could have written a book on Brooklyn alone.”
Restaurants that made the top 100 list city-wide include Al Di La, Best Italian in Brooklyn; Di Fara Pizza, Best Pizza in NYC; Diner, Best Brunch in Brooklyn; Ghenet, Best African in NYC; Peter Luger Steak House, Best Steak House in NYC, and the River Café.
King continues, “The team surveyed and talked with many Brooklynites to find out where they like to eat. The team also made a point of eating their way through Brooklyn to make their selections and get a feel for the dining culture.”
“Brooklyn locals feel strongly about the fact that restaurants there can compete with the best of the best in Manhattan — and rightly so. Anyone who has dined at Saul or waited in line at Egg knows what we’re talking about. And we knew that an authoritative listing of the best restaurants in Brooklyn would have to include time-honored institutions such as Peter Luger’s right alongside places like Lucali in Carroll Gardens.”
“While our book team — including editor CATHERINE JOHNSON, who lived in Brooklyn for a year — led the project day to day, I’ve personally had great meals at dozens of our selections, and offered my opinions liberally, if not always successfully!”
Where the Locals Eat: New York, is now available in Barnes and Noble. For the tech minded, there is an accompanying LocalEats iPhone application.
“We occasionally hear, ‘I can’t believe you didn’t include such and such’ or ‘I ate at this place and they didn’t refill my bread basket,’ but it certainly includes places you won’t find in other guides.”