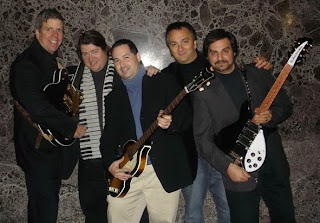 WITH ITS HUGE COLLECTION of popular restaurants and bars, Bay Ridge can also boast that it’s the birthplace of the largest number of pop music bands in Brooklyn. To name just a few: Frankie Mara Band, Pill Hill Radio, Prodigal Child (also played in Bay Ridge as City Kids some years ago), John Schmidt Band, Andrew Gerardi Band … and the list goes on. But one group has a specialty that is reaching a broad spectrum of listeners — they just finished a nine-week run in Atlas Park at Glendale. They are called Yesterday and Today. Their specialty? The title is a clue.

“Our group is out there to recreate those magical Beatles songs,” says ROBERT HANNAN, a Bay Ridge native and one of the founders of Yesterday and Today.

Each member of the group plays multiple instruments and has studied the vocal harmonies to recreate the Beatles sound. “We are even dedicated to using exactly the same instrument combinations that the original Beatles used,” added Hannan.

In addition to playing many popular local Bay Ridge night-spots, Y&T recently did a special performance at Fort Hamilton and will be playing Dyker Park as part of State Sen. Marty Golden’s summer concert series. But a departure from their usual venues will take place Sunday, Sept. 14, when Y&T will be the featured band on a four-hour cruise aboard the yacht Amberjack V.

“It’s a unique venue because people will be able to bring their own food aboard and listen to Beatles music while seeing New York City from the water,” Hannan says.

The cruise leaves Sheepshead Bay at 2 p.m. and sails through New York harbor and up the East River. With a cash bar on board and live Beatles music for dancing, it promises to be an almost ideal city party setting. For more information, go to www.yesterdayandtodayband.com. (See additional photo on page 2.)

ON SEPTEMBER 25, HELEN KELLER Services for the Blind (HKSB) will host its major annual fundraising initiative “Sound and Light Gala” at Steiner Studios in the Brooklyn Navy Yard. Honorees will be BRETT CRAIG, Transitions Optical president and COO, and sportscaster WALT “CLYDE” FRAZIER — Basketball Hall of Famer and former point guard with the 1970 and ’73 champion New York Knicks.

The event chair is ERIN BYRNE, CEO of Burson-Marsteller, and the auction chair is DEBRA DEL VECCHIO, a Long Island native whose sister-in-law is Gowanus-based artist ELLA YANG, a big supporter of HKSB who regularly donates her work to its silent auctions. Among those on the gala committee are KATHLEEN and HARVEY ROSS, who was a prior honoree of the Sound & Light Gala.

HKSB is headquartered in Downtown Brooklyn and led by President FRED W. McPHILLIAMY, who is on the board of numerous Brooklyn groups including the Brooklyn Society for the Prevention of Cruelty to Children, the Brooklyn Benevolent Society, St. Francis College and the Brooklyn Club.

The gala will include a cocktail reception and silent auction starting at 6:30 p.m., followed by dinner at 7:30.