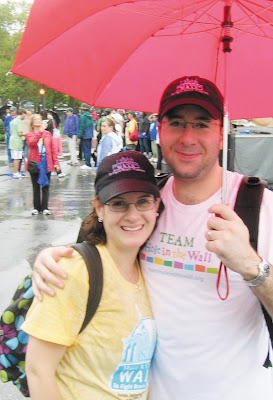 WHEN LYNN BELKIN WAS SIX YEARS OLD she survived an optic glioma — a cancerous tumor affecting the nerves behind the eye.
Belkin’s parents had taken their three girls to a routine eye check, and when the doctor couldn’t refract one of Belkin’s eyes, he diagnosed a lazy eye and gave her an eye patch. Soon after, Belkin’s vigilant mother recognized her daughter’s onset of blurry vision in a description of symptoms of a brain tumor by SANDY DUNCAN (of “Peter Pan” fame) on the “Today Show.” She called Belkin’s father in a frenzy of fear that their daughter had a brain tumor; it turned out she was right.
Belkin underwent a craniotomy at Mass General Hospital and five weeks of radiation therapy to eradicate the tumor. Now she is 27, healthy and, as of last year, happily married and living with her husband, MATT BELKIN, in Boerum Hill.
A few weeks ago, leaders of the nonprofit Have A Chance Foundation contacted Belkin to ask if she would speak at their third annual 5k walkathon, “Have A Chance Walk To Fight Brain Tumors,” through lower Manhattan. Belkin, who had walked in both previous events, was honored by the opportunity to speak on behalf of brain tumor survivors, to share the message that she made it through, and others can — and will — too.
Belkin shared the stage with Have a Chance president ERIC ROTH (son of Have a Chance founders, who started the organization after their son Jeff was diagnosed with an aggressive brain tumor) and two people who spoke on behalf of families that have lost loved ones.
In her speech, Belkin talked about the weeks around her diagnosis, first the misdiagnosis, then her surgeries, MRIs every few weeks and a shunt to drain fluid. Here are some excerpts:
“My brain tumor changed my life when I was very young, although I didn’t know how much until many years later. When I was six years old, I had some vision loss in my left eye. One doctor diagnosed me with lazy eye and gave me a patch, but that didn’t help. My parents took me from our home in Providence to Boston and the Mass Eye and Ear Infirmary. Things moved pretty quickly after that, and I was diagnosed with an optic glioma on my optic nerve and had my first surgery in Boston at Mass General on December 16, 1987. The surgery was tricky, as the tumor’s location put me at risk of losing my vision, but it went well.
“I was the only first grader I knew of who got picked up early from school every day to go to Mass General in a limo booked by her grandfather.
“I was lucky. Even though my tumor was in a dangerous spot, it was low-grade and slow growing.
And even though I was so young, I had the love and support of my family and an incredible team of doctors. My parents were so certain that we were going to get through it that I adopted their positive attitude. I also adopted a way of life. My life is centered around my passion for giving back.”
She mentioned the loss of Paul Newman, who passed away two days before the walkathon, as the embodiment of the spirit of giving. Belkin now volunteers for Make A Wish Foundation and Paul Newman’s Hole in the Wall Gang’s camp for kids with life-threatening conditions.
After earning her undergrad and graduate degrees in business, Belkin decided to dedicate her professional life to helping sick kids as a child life specialist. She is just finishing her master’s degree in child life at Bank Street College of Education. “I add understanding, control and normalcy to the lives of kids who are facing hospitalization or extended medical issues,” she said. “My work helps them to feel normal and, as Paul Newman said, gives them the opportunity to raise a little hell.”
Notably, Belkin’s sisters — who were 14 and 16 at the time of her diagnosis — went on to careers in social work and speech pathology as a direct result of their sister’s experience.
Belkin is now working on a children’s book for kids with life-threatening conditions and their families. She has given a copy to the National Brain Tumor Society and is awaiting feedback while she looks for a publisher. Her main message is a suggestion that has worked for her and her family: Try to take one day at a time.
“A diagnosis doesn’t need to take over your life. It can just be part of the day.”
Her speech concludes:
“I don’t know what my life would be like if I didn’t have a brain tumor. I don’t know if I would be as passionate about helping people, both at work and at events like this. But as I walk my third Have A Chance walk today with you, my incredibly supportive husband Matt and our team The Care Bears, I’m reminded that I wouldn’t have wanted it any other way. Thank you.”