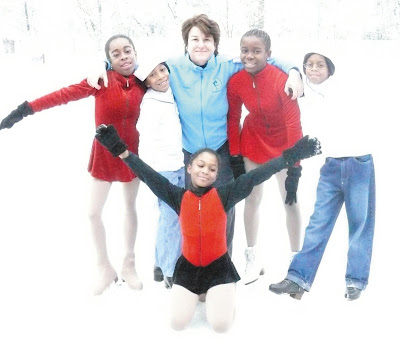 VIOLET EAGAN has been skating “forever.” She trained at Lake Placid with several Olympians, and although she never competed in the games herself, she was capable in all of the steps. Four years ago, Eagan decided to share her favorite sport with her favorite neighborhood — Park Slope, where she has lived for 25 years — by establishing Brooklyn Ice, a not-for-profit skating program for underprivileged kids living around Prospect Park.
“There was nothing like it here in Brooklyn,” she said. “It was time to give something back.”
Brooklyn Ice, based in the Prospect Park skating rink, was recently made a partner of the Prospect Park Alliance, which among other things, means they now receive a discount. The program has six teachers, all paid, for which funds are provided by community grants and the generosity of Eagan’s friends in the skating world. She notes with concern that the community grants especially are drying up right now.
The mission of this free after-school program is to make figure skating an accessible and affordable sport to elementary-age children living in close proximity to Prospect Park. The program brings together a diverse group of 40 children to provide physical training, recreation and the opportunity to form long-term friendships outside their customary peer group. The majority of students re-enroll each year; for the current season, 90 percent are skating in their second, third or fourth year in the program.
Brooklyn Ice participants are recruited from schools neighboring Prospect Park where the majority of students qualify for free lunch, and all members are expected to make the program their number one after-school priority while still succeeding in school.
On Monday, Jan. 19, Martin Luther King Jr. Day, Eagan organized a performance with the skaters of Ice Theater of New York and her Brooklyn Ice students. Prior to that, in December, 1994 Olympic champion Oksana Baiul was part of the winter performance of Brooklyn Ice. On March 4, Brooklyn Ice will hold its big fundraiser performance. Reserve tickets ahead. Visit www.brooklynice.org for more information or to donate, or call (718) 594-7439.

Howe’s Brooklyn: National KidSpirit Magazine Made by Kids, for Kids In Brooklyn Heights