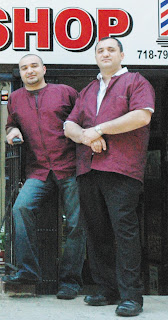 EVEN TODAY, BROOKLYN HEIGHTS is still a magnet for hardworking immigrants looking for a new life in America. Take SERGEY and ROBERT ISAKOV — for these brothers, born in Uzbekistan, cutting hair is a family tradition they have carried to the Heights. In their youth, both Sergey and Robert learned the trade from their grandfather. They immigrated to Queens in 1993, after a time cutting hair in the Russian Army. Once in New York, they picked up English on the streets.
When encouraged by friend and shop owner Edward Shamalov to open a shop in Brooklyn Heights, the Isakovs closed their location on Long Island and renovated a space on Clinton Street. Within eight weeks they opened Clinton Street Barber Shop, which shares an entryway with Shamalov’s dry cleaning and shoe repair shop, Azzuro.
“Since we opened in 2006, we’ve been embraced and feel like we’ve become a fixture in the Heights,” Sergey says. “We feel that a big part of our success here is understanding small business and making customers feel well taken care of every time they come to us.”
Actors, lawyers, secret service agents, former president of St. Francis College Dr. Frank Macchiarola — even Edward Robbins, the first U.S. reporter to leave for Iraq after the 2002 Operation Freedom — come regularly.
Walter Cadette, former senior economist of J.P. Morgan and current resident of Millbrook, stops by regularly, despite the distance he has to travel.
“For me,” he said, “the care, flexibility and excellent service are more than worth coming by just about every time I’m in the city.
To contact the Isakovs, call (718) 797-1247.
IN OTHER NEWS:
Homer Fink’s BrooklynHeightsBlog turned two years old this week (Monday, exactly, 5 p.m., about). Happy birthday and kudos to a blog well-done.
* * *
BROOKLYN POET TAO LIN needed to raise some capital to focus on writing his in-progress second novel, so he decided to sell shares, as he posted on his blog last week. He offered six shares for $2,000 each, which he says would earn each purchaser 10 percent of U.S. royalties once the book is completed. (All shares are sold out; join the waiting list, if you please.) Lin says that with potential film and reprint rights included, investors would continue to get dividends “every six months for the rest of their lives without having to do anything.”
“People who buy shares will actually help me focus more on the novel,” he wrote on his blog — because he has the free time and the extra motivation to bang the book out. Shareholders can sell their portion at any time; he’ll even buy it back, if he has the funds.
* * *
COMIC BOOK AUTHORS GARTH ENNIS and JIMMY PALMIOTTI heft some sizeable ink and writer credits between them. Palmiotti, a lifelong Brooklynite, and Ennis, a transplant from Ireland, are maestros of black humor, gratutitous violence and developed dialogue, who feel disdain for the classic superhero. The pair has teamed with first-time book illustrator Mihailio Vukelic to create “Back to Brooklyn,” a five-book line of stories to be released in September.
“The original idea was Jimmy’s, born I believe of his love for street-level action movies with blazing guns and splashing blood,” Ennis told ComicBookResources.com. “The kind they don’t make anymore, really; today it’s all giant orange explosions and fancy moves. He mentioned it to me about seven or eight years ago, and in the intervening time we developed the plot together.”
“It’s what I love best,” Palmiotti told the site, “a ‘one man against impossible odds’ kind of story set in a very familiar and colorful backdrop. The book is a roller-coaster ride. It’s unlike anything I have ever worked on.”
“Given that I wrote the script, most of the dialogue is mine,” Ennis said, “but Jimmy did contribute some key lines, most notably Bob’s recurring catch phrase, ‘Anything I can do for you, pal?’ — which has an increasingly grim significance as the story develops.”
We can expect a degree of authenticity from these locals, who said they tried to “hit all the major landmarks in the book” and keep “the neighborhood feel to the characters.”
BRIEFLY NOTED:
Army Pvt. JANICE C. HONORE has graduated from basic combat training at Fort Jackson, Columbia, S.C. Honore is a 2004 graduate of Brooklyn Academy For Science and the Environment.