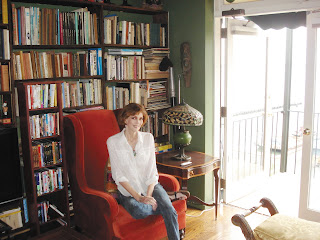 NORRIS CHURCH MAILER, widow of the late, great author Norman Mailer and a long-time resident of Brooklyn Heights, launched her memoir A Ticket to the Circus on April 6, at powerHouse Arena in DUMBO.
PowerHouse hosted a reading and party on Wednesday, April 7, at 7 p.m. with the author, where she was interviewed by Pulitzer Prize-winning historian DORIS KEARNS GOODWIN, gave a short reading and signed books.
NORMAN MAILER’S (fifth) wife of 33 years, Norris Church Mailer, grew up in a small town in Arkansas before she and Mailer fell in love in one night as he passed through town to give a lecture at a local college. The next three decades of her life she spent by his side, negotiating the ferocious world of his fame, friends and literary life, all the while completing a few novels herself.
* * *
AARON FELDER, executive director of the Brooklyn-Queens Conservatory of Music, has penned an essay about his mother in the newest Chicken Soup for the Soul: Thanks Mom, called “A Son’s Admiration.” He writes of how convenient it was that in her position as a nurse she was often able to walk across the hospital to see her sons on some of the many occasions they were taken to the emergency room in need of stitches. (Felder’s brother has had five sets of stitches in his face alone, but Felder holds the record with 57 on a particularly nasty cut.)
He writes, “Through it all, my mother maintained her calm, nurturing way, reassuring me through a long day of needles and stitches that I would be fine, that she loved me. I still have an impressive train-track of a scar, and memories of that day that are oddly positive. It is not just the rosy glow of youth that colors those memories; it is a clear picture of my mother holding my hand and making me feel better.”
Felder lives in Windsor Terrace with his wife, MICHELLE, and their daughter LUCY.
* * *
BAC Benefit Honors Three Brooklyn Greats
The Brooklyn Arts Council (BAC) recently held its annual benefit and auction, “Alive With Art,” at The Bell House in Gowanus. Alive With Art honored MICHAEL A. ARMSTRONG, a lifelong and ardent supporter of Brooklyn’s cultural community; JANE WALENTAS, acclaimed visual artist and restorer of Jane’s Carousel; and RANDY WESTON, world-renowned African rhythms pianist, composer and lecturer.
Spokesperson Sara Derose told the Eagle in an e-mail, “This year BAC’s benefit had a record turnout. We welcomed lots of new friends and art lovers who enjoyed a wonderful evening in celebration and support of arts and culture in Brooklyn at an exciting new venue: The Bell House.”
Among the items auctioned off were original art by local artists, a New York Water Taxi private charter and a one-week stay at a villa in Calabria, Italy.
Guests enjoyed cocktails, hors d’oeuvres by TASTE CATERERS and entertainment by the DAVID O’ROURKE QUINTET. The evening’s entertainment also included the JAZZ STANDARD YOUTH ORCHESTRA, a sponsored project of Brooklyn Arts Council featuring young musicians ranging in age from 11 to 17.
* * *
In celebration of its 100th anniversary, THE BROOKLYN HEIGHTS ASSOCIATION (BHA) hosted “An Evening at Mr. Capote’s” on Monday, April 26, at 8 p.m.
It took place in the elegant 19th century Brooklyn Heights mansion where celebrated author TRUMAN CAPOTE lived and wrote. Curated by novelist and Academy Award-nominated filmmaker PETER HEDGES (who just released his latest novel The Heights), the evening included readings from Capote’s writings, including Breakfast at Tiffany’s and A House on the Heights. The evening also included a brief musical interlude of songs from the score of Breakfast at Tiffany’s and Capote’s Broadway musical, House of Flowers.
* * *
One of the earliest champions of the locavore food movement, ALICE WATERS, gave a reading at BookCourt on Tuesday, April 6, from her book In the Green Kitchen, which presents her essential cooking techniques to plus more than 50 recipes for delicious fresh, local, and seasonal meals.
* * *
From April 3 to May 2, BROOKLYN BOTANIC GARDEN (BBG) has celebrated HANAMI, the Japanese cultural tradition of viewing each moment of the cherry blossom season, from the first buds to the pink blossoms. Hanami is the Japanese term for cherry blossom viewing, around which there are long-established customs, such as strolling among the trees and capturing falling cherry petals in open palms.
During Hanami, visitors can take a free Seasonal Highlights Tour (Saturdays and Sundays at 1 p.m.) focusing on the ethereal beauty of BBG’s Japanese plant collections and specialty gardens, including the more than 220 exquisite flowering cherries, the C.V. Starr Bonsai Museum, and the Tree Peony Collection. Brooklyn Botanic Garden’s curator of the Japanese Hill-and-Pond Garden, BRIAN FUNK, also hosted a Meet the Curator session on Wednesday, April 14.
The four weeks of Hanami culminate in the garden’s legendary two-day festival Sakura Matsuri, a tribute to the Garden’s collection of flowering cherries. Sakura Matsuri is scheduled for May 1 and 2, from 10 a.m. to 7 p.m. each day, with over 60 performances, demonstrations, and exhibits — many of which are new and specially commissioned for the celebration.
The cherry display has been tracked in real time on BBG’s web-based CherryWatch feature, which maps the entire collection and provides daily blossom updates.