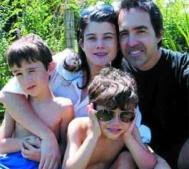 SIMONE KAPLAN IS A 33-YEAR-OLD BRAZILIAN WOMAN who lives with her family in Brooklyn Heights — near the Brooklyn Women’s Exchange, where tomorrow she will present her whimsical and charming handmade dolls in a holiday trunk show in late afternoon.
Kaplan, who grew up partly on her parents’ farm, says she wasn’t particularly interested in dolls as a child, but that she “loved climbing trees, riding horses, feeding animals and running barefoot.”
She adds, though, that in those days, in the interior of Brazil, they made their own playthings, including dolls. Through her mother and grandmother, both seamstresses, she learned about fabics and needles. Kaplan used those skills as a professional actress in Brazil, when she would help make costumes and puppets. She used them again when she moved to the States to learn English and took a job restoring costumes for the San Francisco Opera. Later, in Portugal, she studied tapestry at the Lisbon Costume Museum. Only after starting her own family did she “truly fall in love with making dolls,” which is the basis for her small, thriving handmade business, Floret.
“I think I’ve finally found my calling,” she says.
Kaplan’s husband grew up in the Heights. They feel “very lucky” to be raising their two young sons in Brooklyn after meeting in San Francisco. Shortly after moving to the neighborhood, Kaplan rented a studio in DUMBO to sew and write and often took her sons with her. Based on the boy’s drawings, they would make dolls.
“I fell in love with the process,” she says. “The boys were so involved. I realized that they really appreciated the handmade dolls. They were enchanted. I was, too.”

So Floret was born. The first line was Little Darlings, designed for small babies. Then she created Jumpin’ Beans, “to be loved by boys.” She took them to shops in the neighborhood and five of the six stores she introduced them to bought the dolls. Seeing that her creations might present a viable business, Kaplan says, “I just embraced it with passion.”
Floret is now making dresses and will soon launch a line of jewelry. By February Floret products will be in 30 stores around the country. Just under a year ago Kaplan began doing New York trade shows to promote her ideas, and now has a small part-time staff working to help her meet her target. She especially loves that she can work on her own schedule, while remaining free to pick up her boys after school.
“I think what we are doing goes against the mass production system. We draw everything, make samples. Nothing is rushed about the process. It’s not going to be a plastic doll that is thrown in the corner.”
Although the ecomony is worrisome, Kaplan’s goal is to open a store by next year. As they grow, though, she is sure of one thing: Floret will stay small, true to its original model. She wants to establish herself as a designer.
Until Floret (the store) opens, Kaplan’s dolls can be found at Hazel Wood Children, run by another local mother and designer, JENNIFER DiDONNA, at www.hazelwoodchildren.com or at the Women’s Exchange at 55 Pierrepont St.