She Had Nine Siblings, Six of Whom Were Adopted 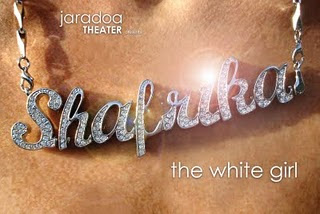 WITH ROCKING RHYTHMS and operatic projection, ANIKA LARSEN opens her heart and voice to tell a powerful, personal journey out of a multicultural childhood. Her story, Shafrika, the White Girl, is a music-driven metaphor for how the social upheaval of the 1960s flowed through generations.
Supported by an ensemble cast that sometimes challenges her, Larsen and her collaborators have a masterful sense of pacing. They mix classic storytelling with music and rhythms that so engage an audience, the curtain call applause and cheers seem to say, “I get it! I love it! That’s why I’m here!”
Shafrika tells Larsen’s story of growing up in Cambridge, Mass., with nine brothers and sisters who are black, white, Asian, Latino and Native American — six of whom were adopted. Larsen was a middle child. The 17-member cast portrays the many people who helped to shape her identity.
In May, before the show opened, she told Playbill.com about the writing process. “The more specific I got with my story, the more people would come up to me after I’d done a workshop or reading version of it and say, ‘I know exactly what you mean!’ And their life would have been nothing like mine, but in some way we all grapple with issues of identity and of race. That is tremendously exciting and is, I think, why it’s going to work as a show because there’s a universality to all of the themes.”
Larsen, who now lives in Park Slope, has worked on and off Broadway for more than a decade, previously appearing in Rent, the original Xanadu, All Shook Up and, recently, as Kate Monster and Lucy the Slut in Avenue Q.
The idea for Shafrika came to her 10 years ago, and soon after she met the director, APRIL NICKELL, who has worked with her to shape the story.
Lyrics for Shafrika were written by Larsen, with original music by Tim Acito, Joshua Henry and Janice Lowe. The choreographer is by Luis Salgado (who is also in the cast of Broadway’s In the Heights) and musical director is Karl Mansfield. The show is backed by a five-piece band.
Scenic design is by Josh Zangen, lighting by Herrick Goldman, costumes by Andrea Varga and sound by Mike Farfalla.
With Shafrika, acting company Jaradoa (Just A Roomful of Artists Doing Outreach And) Theater, co-founded by Nickell and Larsen, kicks off its third season. Along with creating theater, the member-based company prioritizes serving the community through outreach and partnerships with relief organizations. Another founding member, TELLY LEUNG, who was born and raised in Brooklyn, has Broadway credits including Sondheim’s Pacific Overtures and Rent. JOHN HARRISON, a member of the Shafrika cast, is a Brooklyn Heights resident.