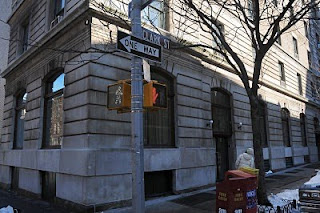 “IS IT POOR MANAGEMENT, bad timing, or just a terrible location?” When a commercial corner location in toney Brooklyn Heights remains perpetually empty, or even when occupied it is home to short-lived enterprises, one might ask that question.
At the corner of Hicks Street, 41 CLARK STREET has had two incarnations as restaurants in the past 10 years. Before that, it had remained empty for years while the St. George Tower, a 1929 wing of the original hotel, was renovated. The 5,000-square-foot site, which involves a walk-up less than 10 feet from street level, was completely renovated for the first restaurant, with a “beautiful blond wood interior, including new bar and private dining area,” according to a former patron. But it simply never became a destination for enough diners.
It was sold to an enthusiastic new restaurateur who began to develop a local following, but was struck by lightning — literally. An upper section of the co-op residential tower at 111 Hicks St., the landlord for the restaurant, was damaged by lightning. A bulky sidewalk shed went up at the Hicks and Clark corner of the tower, obliterating views of the restaurant and discouraging use of the entry at the 41 Clark St. co-op. The restaurant was unable to develop enough clientele to pay rent, even with some creative brunch ideas and some supportive neighbors.
Today, the site still sits empty. The co-op took over part of the 5,000-square-foot interior for locker rooms to serve its maintenance and doorman staff. 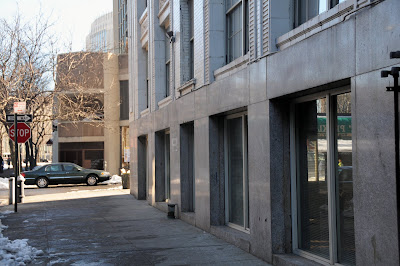 Around the corner, at the other end of what was originally the Hotel St. George complex, sits 3,500 square feet that was renovated into potential retail space. It anchors the corner of Henry and Pineapple streets, and it had originally housed part of the hotel’s power plant and salt-water pump. (Yes, the Hotel St. George at one time generated its own electricity and pumped salt water into the famous Olympic-sized swimming pool.) Sitting just below grade, this heavily fenestrated spot now involves a walk down four steps, and the owners are asking $15,000 per month for the whole footprint. Renovated at the same time that the Hotel St. George management created student housing at 100 Henry St., it has remained empty since, asking $51 per square foot.
Farther down Henry Street at the corner of Cranberry was once one of the most celebrated Chinese restaurants in Brooklyn. Mayor Koch was a regular at 60 Henry St., called Su Su’s Yum Yum. But a number of issues, including the vent system that pumped fumes directly onto Cranberry Street, led to Su Su’s demise. After remaining empty for almost 10 years, the 3,500-square-feet retail site that made up Su Su’s corner was renovated by a restaurateur and his partner, a talented woodworker, into a tapas bar. (Venting for a full kitchen was still an issue at that site.) The tapas bar failed and the woodworker kept the space, reworked the restaurant concept and renamed it for his daughter, Isobel. Despite having the most spacious and creatively appointed bathroom in any Heights restaurant, the venture failed.
The site remained empty until a combination of three small stores, including Blue Pig ice cream and the Busy Chef, took over the corner. Busy Chef became a popular “re-heating center” for many food items that seemed to have been cooked elsewhere, and offered lots of baked goods to accompany the busy coffeepots. But it also became infamous for a credit card scam that involved not only the Henry Street site, but one on Court Street and another in Fort Greene. The site remains empty, asking $45 per square foot.
Looking at the three seemingly “jinxed” spots, one local real estate pro said “Even a good corner location can be screwed up by a bad management but most restaurant failures result in taking on too much rent and overhead to get a great location.” Positive word-of-mouth can build a restaurant in 18 months, he added, but many small guys just run out of money or get in over their heads before that happens.