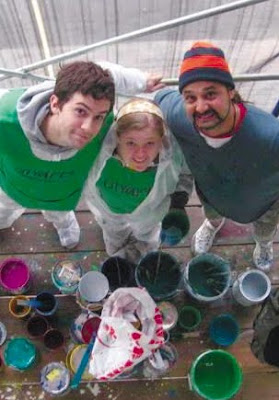 AS THE TREES BEGIN TO LOSE THEIR LEAVES, Crown Heights is receiving a dose of greens, yellows and reds from another source.
CITYarts, a 40-year-old non-profit public arts organization, is producing its 269th mural project there, in a collaboration between Brazilian-born artist DUDA PENTEADO and roughly 200 students and community members from Crown Heights and Bed-Stuy (with the Department of Parks and Recreation). Penteado, one of Brazil’s most acclaimed artists, known for his work with communities abroad and in the U.S., is now leading the young painters in the project that began in June and is set to be finished in mid November.
Under CITYarts’ Global HeART Warming project, the 100-by-75-feet mural at St. John’s Recreation Center (1251 Prospect Pl.) is an attempt to “create a piece of public art that explores ways in which communities can be more sustainable and environmentally conscious. 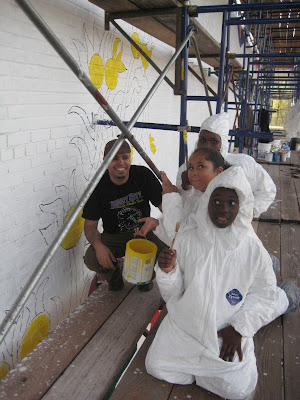 “It will celebrate nature and explore ways of positively affecting climate change,” the organization says. Workshops were conducted during June and July. Painting began August 5 on weekdays during business hours.
“CITYarts’ goal is to engage youth in becoming active participants in shaping their own future,” said TSIPI BEN-HAIM, executive and artistic director of CITYarts. “The creative process of painting a mural on the theme of global warming leads them to find ways to make their lives and our world a better place.”
For more information, visit www.cityarts.org.
* * *
MORE NOTES ON PEOPLE:
BROOKLYNITE YLON SCHWARTZ — poker player, chessmaster — has made a meager living on both games for 15 years, but as the New York Times writes, “he is about to enter a higher tax bracket than most gamblers dare to dream about — the million-dollar club.”
“When Mr. Schwartz was starting out, no wager was too small or too far-fetched. Like the day he bet several people on the street that he could throw a lemon across Church Street from Liberty Plaza and onto the roof of a Burger King near the World Trade Center. Unbeknownst to the bettors, he had practiced the night before. He walked away with $340.”
Schwartz is one of nine finalists in the World Series of Poker Main Event — considered the unofficial world championship. He beat more than 6,800 competitors to get to the final table in Las Vegas. First place walks away with $9.1 million, but even last place takes $900,000.
“Chess players are trained to have excellent memories,” he told the Times. “In poker, you need to remember betting patterns. All the patience I got in chess really helps me out.”
BROOKLYN BREWERY’S STEVE HINDY has just settled a sticky label dispute with “the Trappist monks of Belgium” to the tune of a $60,000 loss, according to Gothamist: “CityRoom reports that BB owner Steve Hindy started making a refermented ale called Brooklyn Local 1, which borrowed a method from the monks.
But the problem was in the design of the bottle he used for it: ‘An amber bottle design featuring a double-embossed ring at the base of the neck. It was not unlike the single-ringed bottle used by the Westmalle Abbey in Belgium and by the New Belgium Brewing Company of Fort Collins, Colo.’”
Hindy noted of the monks: “God is on their side.”

Howe’s Brooklyn: National KidSpirit Magazine Made by Kids, for Kids In Brooklyn Heights