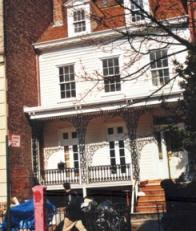 WHILE COMPOSER/LIBRETTIST AND ALSO PLAYWRIGHT MARTIN HALPERN was convalescing from an operation, a group of his Brooklyn Heights-Hills-Slope friends last Thursday attended a performance of his play, No Moves Back, in the small Roy Arias’ Payan Theatre at 300 West 43rd Street. Very different from Halpern’s opera, The Siege of Troy, staged in Brooklyn last year, the play focuses on modern-day personal anxieties rather than on historical/political themes. (The opera, on the dashing of Athens’ imperial ambitions in 413 B.C., carried allusions to Bush policies and Iraq.)
First written in 1979 and revised in 2007, No Moves Back presents two philharmonic musicians who have been shunted into retirement and who meet for a weekly chess game in Prospect Park. The depressed and acerbic Morrie (Michael Twaine) has lost his drive to win, though he still keeps an eye out for miniskirts, while Alan (Peter Ludwig) preserves an optimistic front. Besides a chess table and a pair of chairs, the only prop is a drinking fountain that has just stopped working, and to which are drawn a presumably reformed alcoholic (who still succumbs to his pickpocket urge), a panhandling blind female accordionist, and a spaced-out young woman who claims to be on her way to perform a mercy killing on her hospitalized and terminally ill grandfather.
The tensions arising from the interactions of these characters (plus a fountain repairman and a policewoman who also show up) held the rapt attention of the audience. The actors were uniformly convincing, with special mention due MICHELLE CONCHA in the difficult role of the confused angel of death who draws somewhat more than fatherly attention from Morrie. Everyone in the local contingent was grateful to DR. CHARLES and LUCILLE PLOTZ for arranging the evening, which began with dinner at the Metro Marché bistro in the Port Authority Bus Terminal. The group included PHIL and MARY VAN ORMAN, BOB and SALLY BLACKMAN, AL and JOAN KRONICK, and HENRIK and ELAINE KROGIUS.
AN OBSCURE DEATH: A query from LOIS BERSETH HEDLUND of Brooklyn Heights has resulted in the discovery that ALFRED PALMER, long the owner of the historic frame house with a New Orleans-style wrought-iron-adorned verandah at 135 Joralemon Street, apparently died last year.
Ms. Hedlund wrote us that her husband CARL HEDLUND had left a valuable toolbox in the garage of a carriage house owned by Palmer at 280 Hicks Street before being asked to “temporarily” vacate the space. Carl had subsequently been unable to retrieve the toolbox. Passing the carriage house last week, Lois wrote, “I noticed a small paper notice on the door saying the premises were sealed by the Police Department. I asked myself, ‘Did he die?’”
She said she then checked the Social Security Death Index, “which indicated that Alfred Palmer, born 6 January 1925, last residence 11201, died May 11, 2008.” She added, “Do you know anything about this?”
It was news to us. Alfred “Alfie” Palmer was something of an eccentric and a cantankerous sort, who refused for years to fix up 135 Joralemon Street. After it suffered damage from a New Year’s Eve fire, the Brooklyn Heights Association contemplated a demolition-though-neglect action against Palmer to force him either to restore the house or sell it. Palmer was known to say he would just as soon tear it down and build a six-story apartment house. Eventually he did sell it to a developer who, in 2007, restored it to mint condition.
Alfred Palmer’s was an interesting and curious presence in the Heights. We welcome information from anyone who knows more about his last days.