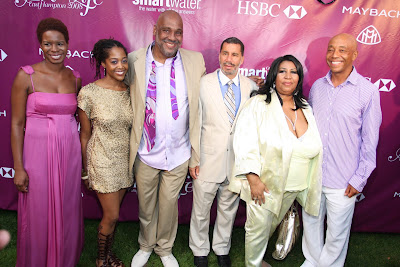 GOVERNOR PATERSON ANNOUNCED LAST WEEK THAT DANNY SIMMONS, co-founder and vice chairman of Rush Philanthropic Arts Foundation, is now a member of the New York State Council on the Arts (NYSCA).
An accomplished painter and curator, Simmons is also co-founder and executive producer of younger brother Russell Simmons’ “Def Poetry Jam” on HBO; founder of the Corridor Gallery, created in part of his converted Brooklyn loft; and president of the Rush Arts Gallery.
“New York state, like everywhere else, is facing unprecedented budget constraints,” said Simmons. “We are going to have to find new and innovative ways to keep the cultural landscape vibrant throughout these hard times.”
The council is comprised of up to 20 individuals who are appointed by the governor and approved by the state Senate. NYSCA makes more than 2,500 grants each year to arts organizations in every arts discipline throughout New York. Its many goals include supporting the activities of nonprofit arts and cultural organizations of the state and providing disadvantaged urban youth with access to the arts. The council also provides exhibition opportunities to under-represented artists and artists of color. Among the local organizations that Simmons has supported and worked with on behalf of youth include the Brooklyn Museum, Pratt Institute and the Brooklyn Academy of Music (BAM). Simmons also serves on the executive boards of the New York Foundation for the Arts, the Brooklyn Public Library and BAM.
State Sen. VELMANETTE MONTGOMERY (D-Brooklyn) noted that Simmons’ oversight of funding support for arts and education programs is needed now more than ever in the wake of Governor Paterson’s plans to cut spending for the arts by $8.3 million in the 2009-10 state budget. According to the New York State Alliance for Arts Education, the proposed budget cuts will impact 55 cultural institutions Brooklyn-wide.
* * *
MORE NOTES ON PEOPLE: 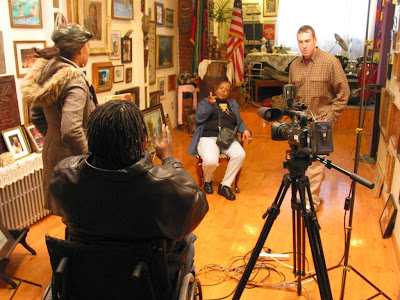 EACH BROOKLYN COMMUNITY is full of great stories, mom-and-pop shops, diverse residents and abundant history. The TV series “Neighborhood Beat” of Brooklyn Independent Television (BIT) was created in 2003 to tell those stories in “Brooklyn-to-Brooklyn” style, so residents can be tourists at home. Now, a crew of eight specially selected Brooklyn-dwelling production trainees is helping to tell the story of Crown Heights in a new episode airing Jan. 29.
While the professional production team of BIT usually produces its shows, Crown Heights will be featured through the work of eight specially selected Brooklyn residents in a mentorship program through a BRIC Arts program, Center for Media Education at BCAT (CME). (BIT is a programming initiative of BRIC Community Media, the media arm of BRIC Arts).
Through a grant from the Concord Baptist Christ Fund, the eight trainees underwent 12 weeks of rigorous training by BIT producers KUYE HARRIS and KECIA COLE and CME Manager CARLOS PAREJA. They learned how to work as a team to conceptualize, pitch and produce story ideas that will result in a high quality, engaging television episode of “Neighborhood Beat: Crown Heights.” They will not only improve their television production skills, but upon successful completion of basic courses, students become BCAT-certified producers and have free access to the equipment they trained on to produce programs for cablecast on Brooklyn Free Speech TV (BFS TV). CME at BCAT trains over 400 Brooklynites a year, providing media services, educational classes and mentoring programs that enable Brooklyn residents to produce their own television programs.
“Neighborhood Beat: Crown Heights” will spotlight the neighborhood’s architecture, businesses and culture while celebrating the unique residents that call Crown Heights home. The pilot will air Jan. 29 at 8:30 p.m. on the Brooklyn Community Access Television (BCAT) network (Time Warner 56, Cablevision 69, RCN channel 84 and Verizon channel 44.) New episodes premiere every Thursday with a different neighborhood. Neighborhood Beat is also streamed live on the web at www.briconline.org/bcat.
“These students have shown a vested interest in creating programs that speak to their community,” says GREG SUTTON, BRIC director of community media programs. “The pilot mentorship project has already delivered promising results. To have BIT and CME work together takes our work to a new level of collaboration. Everyone involved is committed to the core; not a single one of our eight students has missed a class.”
For more information about BRIC and its community media programs, visit briconline.org/bcat.
* * *
JOYCE BECK, THE FOUNDER AND DIRECTOR of J’s New Dance Center at 7315 Fifth Ave., has agreed to serve as the home for a series of acting classes and workshops with Genesis Repertory founders MARY ELIZABETH MICARI and J. MICHAELS. As an attempt to open the classes up to all those who want to learn, Genesis will be charging what works out to about $13 per week.
Tentatively scheduled to start Saturday, Feb. 7, MiCari and Michaels will conduct three class levels, from rudiments and technique of acting with voice, movement and character development, through a master class requiring audition. All members of the class can perform in an industry showcase at the completion of the class.
Both MiCari and Michaels each possess credits on Broadway, Off-Broadway, in regional and repertory theater and film. MiCari is Genesis’ artistic director as well as a trained classical actress and opera singer; Michaels is a former professor at Kingsborough College. Genesis Repertory is 10 years old. For more information on the classes please call (347) 492-0534 or e-mail Genesis.Brooklyn@ gmail.com.
* * *
FIFTH-GRADER KEMOY GOURZANG was walking to school last week in East Flatbush when he found a wallet on the sidewalk with at least $500, according to an AP story. Kemoy took the wallet to P.S. 198 principal Joy-Ann Morgan. She called the owner, who gave $100 as a thank you to the student. “This is what we try to teach,” Morgan said, according to the Daily News. “I got on the PA and announced that we had a hero in school.”