YOUME LANDOWNE met ANTHONY HORTON four years ago while waiting on a subway platform. She was a multimedia artist based in Crown Heights, he an artist living in the subway tunnels beneath the city. The two talked extensively about life and art, and eventually Anthony invited Youme into the tunnels to help her understand what life is like below the radar.
Over a period of time the two decided to make a graphic novel-style book together, beginning with an accelerated account of their meeting, to tell Anthony’s story:
“I was born to people who didn’t want me. So they gave me away. But I guess the people they gave me to didn’t want me either.
“That’s how I ended up on the streets alone and uneducated. I couldn’t read or write. I didn’t know anything, and the world knew it.
“It had been bad on the streets. But it was worse in the shelter. I saw things no kid should ever see.”
Pitch Black could serve as a tool for educators when approaching the difficult subjects of homelessness and cultural differences (the publisher would like to place it in school libraries to make it accessible to young readers), but it is likely to be most appreciated by adults for its thoughtful and forthright handling of the material.
Here, Youme talks about the writing process:
“This is a sensitive subject. The book doesn’t really address that going into the subways is illegal. I don’t want people to put themselves at risk, but I do want them to look each other in the eye. “When Anthony invited me down, I was totally interested. I didn’t feel uncomfortable, but I didn’t think about the trespassing part. I’ve done some traveling and taken some self-defense, and the first rule of self-defense is to trust yourself.
“The book is pretty much all his words, with me putting them in some kind of order. It became a lot softer in the process of writing it. Tony’s story is more violent: It was and continues to be compelling and disturbing. He’s a remarkable person.
“Just cause you can’t see don’t mean aint nothing there’ is my favorite quote of Anthony’s. I think it sums up the book.
“The first version I made of woodcut and collage. We wanted to show how the city is layered. I’m hoping to do something with the woodcuts because they took a long time!
“He sketched most of the panels, but I reworked them to fit the dimensions of the page. Reading, writing and drawing has been a solace to him. He draws on his own or through shelters. 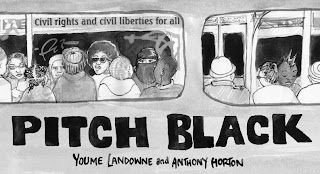 “Pitch Black is kind of a love letter to New York. In this city, we are humane with one another because of the proximity. The subway brings us closer, the streets bring us together.
“There is an unspoken piece to it about cultural differences and reaching across cultural differences that is open ended, about ‘seeing where this goes.’
“I’m not a social worker, but worked as a visiting artist in District 75, so I have some experience with people in an emotionally undesignated category. I take a lot of responsibility with that — the division between mental health isn’t who is in a hospital or not. And who decides who is in and who is out?”
* * *
Youme will be part of the Brooklyn Book Fair this Sunday, Sept. 14. At her table, she will be collecting book donations for Books Through Bars, a program to give quality reading material to prisoners. Her first book, Selavi, A Haitian Story of Hope, tells the true story of children in Haiti who started their own radio station. It won the Jane Adams Peace Award and was selected for the distinguished Texas Bluebonnet Master List.
Pitch Black: Don’t be Skerd is available at Word Books, St. Marks Bookshop, McNally Robinson Booksellers, Shakespeare & Co. and Vroman’s Bookstore, or can be ordered at your local book store.