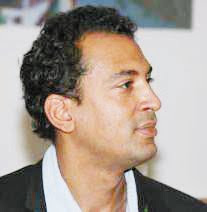 THE WORLD-RENOWNED BROOKLYN MUSEUM, one of the oldest and largest art museums in the country, has permanent collections ranging from ancient Egyptian masterpieces to contemporary art, representing a wide range of cultures. Now and then, though, curators initiate more unorthodox exhibitions, drawing on the various talents of artists close to home. “Click! A Crowd-Curated Exhibition,” which ended last weekend, is one such idea. Another is “New York State of Mind,” opening Aug. 14, an offshoot of a four-year collaboration between the museum and Institute for Community Living (ICL), a non-profit agency that serves adults with serious mental illnesses and developmental disabilities.
Bed-Stuy resident DYLAN STANFIELD has been the arts and activities counselor for the disabled adult residents of ICL for four years, since the Art Enhancement Project was initiated to increase tenants’ quality of life. As his full-time job, Stanfield visits eight houses on a rotating basis, guiding residents in activities — painting, drawing, clay and photography — to help them express their interpretations of the world.
Stanfield takes requests for projects, but mostly makes it up day by day. Both Stanfield and his students draw inspiration from their twice-monthly themed fieldtrips to the Brooklyn Museum. For Stanfield those trips are learning experiences in other ways: How, for example, does one take a group of visually impaired adults to an art museum?
“Well, I’m learning that myself,” he says. “It is a lot of explaining art and the concepts that go into it. We might look at tribal masks, feel them, and talk about why they were made and the cultural significance in how they were used.”
The museum is also developing a touch garden, and on occasion holds special open houses where visitors can wear gloves to touch certain sculptures, which is otherwise not allowed.
Stanfield, who moved from Olympia, Wash. 10 years ago, was involved with non-profits before ICL, teaching art in schools and even once painting a mural for one of ICL’s buildings. He was between jobs when ICL had an opening for this position. The artistic growth has since run in both directions, as Stanfield has been pushed by his students and their various needs to increase the mediums he works with.
“I was excited to work with a different population, grow a little, expand my horizons. I had no expectations, and I think that has helped me to appreciate the art in a very art for art’s sake kind of way. Originally I am a painter, but the first day I started at the Jaslow house, where all the residents are blind, I thought ‘I gotta figure this out.’”
He is also the curator of ICL’s annual art exhibition at Brooklyn Museum. This year, three mediums will be featured: wire and clay sculptures to capture self-expression, and photography and paint in the themes of seasonal changes, light and life in the city. Go to www.brooklynmuseum.org for visiting information.
MORE NOTES ABOUT PEOPLE:
ACTING TEACHER TO THE STARS PETER KASS, whose students included Faye Dunaway and Maureen Stapleton, died on August 4 at age 85. He was a lifelong Brooklynite. Although also an actor and director, Kass was best known for his work as a relentless acting instructor, serving from 1956 to 1960 as head acting prof at Boston University, and later at the NYU School of the Arts from 1965 to ’82. Kass himself was a protégé of Clifford Odets.
* * *
ROBERTA KARMEL, PROFESSOR OF LAW at Brooklyn Law School, was recognized August 10 for her path-breaking achievements by the American Bar Association’s Commission on Women in the Profession. Karmel, with five other women in the legal profession, received the Margaret Brent Women Lawyers of Achievement Award, to recognize that they have excelled in their field and paved the way to success for other women lawyers.
Professor Karmel is a trustee of the Practicing Law Institute, a member of the American Law Institute, a fellow of the American Bar Foundation and vice-chair of the International Coordinating Committee of the ABA’s Business Law Section. She serves as co-director of the Dennis J. Block Center for the Study of International Business Law at Brooklyn Law School, where she has taught securities law for more than 20 years.
* * *
SIAN KILLINGSWORTH IS A MOTHER, WRITER, TEACHER and Park Slope resident who will soon be leading a poetry workshop to help poets with a range of experience to improve their craft. As a prelude, she will host two poetry readings featuring accomplished poets, with an open mic afterwards, on August 13 and 27 at First Presbyterian Church in the Peace Garden, 124 Henry St. Refreshments will accompany the poetry. The 10-week workshop will begin Sept. 10; some scholarships are available through the church. Contact Killingsworth at poetryclasses@gmail.com.
* * *
BROOKLYN CAPTAIN MIKE MAYNARD led his volunteer firefighters to a first-place win for the second year in a row at the annual Atlantic Canada Vehicle Extrication Competition held in Windsor on August 2-3, reported NoveNewsNow.com. The exercise is education first, competition second, as the different teams all learn from watching each other.
“Over the years, we’ve learned how to free people from cars quicker,” Maynard told the news source. “And at the end of the day, when we’re out on the highway, it makes us better at getting victims out safely … people don’t realize the amount of training hours it takes to do this.”
The teams have 20 minutes to extract patients from a vehicle. The Brooklyn team’s scenario was a vehicle that had hit a barrier, with one victim trapped inside, with a second car on the driver’s side of the hood and a truck against the passenger’s side of the trunk. From the Brooklyn team, BRETT TETANISH won the Top Incident Command Award, and JESSICA MURPHY, a medic with the Redneck ResQTec-nicians, won the Top Medic Award. The Brooklynites have the opportunity to advance to the national competition.