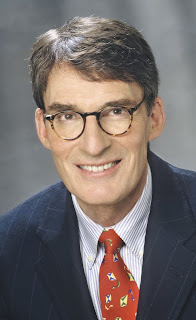 OFTEN SEEN ON THE STREETS of Brooklyn Heights is a tall, athletic and intensely focused jogger whose tortoise-shell glasses and full head of dark hair bring to mind the character Clark Kent — the mild-mannered reporter and alter ego for Superman. To many of his Heights neighbors, this studious athlete really is a superman in the field of financial journalism. His name is JIM GRANT.
In celebration of 25 years of publishing his acclaimed financial newsletter, Grant’s Interest Rate Observer, a new book called Mr. Market Miscalculates will hit bookstores in October. This is Grant’s fifth book, subtitled “The Bubble Years and Beyond.” Judging from early professional praise of the galleys, Grant’s new book is destined to give experts and neophytes alike an “astute, witty and penetrating” understanding of the tumultuous events of America’s bubble era, from the dot-com boom of the late 1990s to the house price levitation early in this decade to this year’s worldwide mortgage collapse.
Like Grant’s popular newsletter, the latest book is peppered with cartoons by Brooklyn sketch artist HANK BLAUSTEIN. (One example: the sketch shows the rear of what might be a Bentley. Above the license plate is a sign that asks “How’s My Investing ?” and then gives an 800 number.)
Friends in Brooklyn Heights and colleagues from afar all share admiration of Grant’s mental acumen, and some even assume it is enhanced by his intense fitness.
Formerly a writer for Barron’s and the Baltimore Sun, Grant is a founding general partner of Nippon Partners, which invests in Japanese equities. He was a long-time panelist on Louis Rukeyser’s “Wall Street Week” and has appeared on “60 Minutes,” “CBS Evening News,” “Nightly Business Report” and Bloomberg TV.
While friends and admirers await the fall publication of his latest book, they may read his biography of John Adams (Farrar, Straus & Giroux) or his biography of Bernard Baruch. Readers may learn more about Grant’s Interest Rate Observer by visiting the web site at www.grantspub.com.
Among Grant’s many notable fans, Steve Croft of “60 Minutes” says, “When it comes to writing about complicated matters of business, Jim Grant has no equal.” Mohamed El-Erian, a brilliant financial manager who took Harvard’s endowment to new heights and co-manages Pimco, one of the largest investment managers in the world, says, “We eagerly await each and every (issue) of Grant’s Interest Rate Observer for uniquely insightful, astute, witty and penetrating anaylsis of key economic and financial factors.” Finally, David Swensen, chief investment officer at Yale, calls Grant’s latest book “a greatest-hits collection … [Grant’s] trenchant observations and elegant prose never fail to illuminate and educate.”
* * *
MORE NOTES ON PEOPLE:
“EVERYONE IS ANGRY, EVERYONE IS afraid for their relatives,” the Rev. ALEXANDER TANDILASHVILI, pastor of St. Nino’s Georgian Orthodox Church in Williamsburg, told the New York Times on Sunday. The regular weekend worship became a vigil as the parishioners, whose roots are in Georgia, received news via cell phone of the ongoing bombing. So many people came to pray at St. Nino’s that the building was filled with kneeling parishoners in the lobby, reported the Times. Calls to cell phones from relatives were answered with sobs.
“For now, there is nothing better we can do,” said Tandilashvili.
There are about 5,000 Georgian immigrants in NYC, mostly in Brooklyn —the largest concentration in the country, according to the local Georgian Consulate.
BETH CALISE IS A TEACHER at Mark Twain IS 239 in Coney Island. After seeing her school place second in fundraising for the American Cancer Society’s Making Strides contest last year in Brooklyn, she challenged her students to do better. The whole middle school working together quadrupled last year’s number, beating out the closest high school by more than $10,000.
Early this morning Calise was a movitational speaker at Brooklyn’s Making Strides Season Kickoff Breakfast at the Brooklyn Marriott. Says Dom Cappuccilli of ACS, “Her ability to rally her students and get them behind this great cause was truly inspirational.”
CARL HUM, PRESIDENT AND CEO of the Brooklyn Chamber of Commerce, needs a hand promoting Brooklyn. US Airways Magazine will give Brooklyn a 24-page editorial spread, “Profile: Brooklyn” in its November issue, which will reach a global audience of about 5 million. To get this one right, Commerce members are invited to help:
“Your participation in this project is welcomed by the US Airways Magazine editorial and marketing teams,” writes Hum. “Their staff will be seeking substantial editorial input to tell our story, as well as providing a dynamic marketing vehicle for private and public organizations that want outstanding international and national advertising exposure.”
In general, the spread will be a comprehensive look at the business sectors that shape the borough’s landscape, from education and healthcare to the diversity of dining and shopping. To contribute, contact Chris Denby (336-383-5584, chris.denby@paceco.com) or Heather Buchman (336-255-0195, heather.buchman@paceco.com) at US Airways Magazine for more information.
ON THREE DIFFERENT OCCASIONS last week, kittens were tossed out of vehicles onto the Verrazano-Narrows Bridge. Each time, MTA Bridge and Tunnel officers were alerted by motorists to rescued the little guys, reported the Staten Island Advance. Two 2-month-old calico kittens have been adopted — Elle (as in the double L of “lower level” where it was rescued) went home with Officer JOHN ESPOSIT, the other with Officer CARLOS MARTINEZ, whose 17-year-old cat died recently. The third had to be put down due to its injuries. The kittens were treated for free by Dr. CHRISTINE BROGNANO of Rosebank Animal Hospital. Next question — will the abandonment stop?