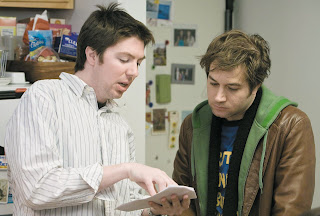 WRITER/PRODUCER DANIEL NAYERI and co-directors BRENDAN CHOISNET and ADAM BROWNE have created a critique-laden tribute to Williamsburg, Greenpoint and Park Slope in “The Cult of Sincerity,” a film that highlights a hipster crowd and a spectrum of generational attitudes, and addresses the question, what does it mean to be good? Certain hotspots, such as Stain Bar on Grand Avenue, feature prominently. The young filmmakers were Kensington-based roommates at the time they conceived the intellectual comedy.
DANIEL PETTROW of Williamsburg stars in “Cult” as 20-something Joseph, disgruntled after the divorce of his parents and with the preoccupied, cynical attitude of his generation. At an open mic night at Stain Bar, jaded but tired of being so, he spontaneously presents his idea to form a cult of sincerity to reclaim goodness. Determined to find something to believe in — simple enough to put on a T-shirt — Joseph becomes an awkward but endearing self-appointed white knight of the streets, doing good deeds, planting trees and helping strangers. Along the way, he meets a slew of sleazy, pretentious characters, but more notably, also makes some unusual, illuminating friendships.
Directors Browne and Choisnet have followed similar paths, both attending NYU Tisch School of the Arts, both now married and living in Brooklyn. Together they own Plywood Pictures production company. Choisnet has directed more than 100 short projects, but this is his feature-length debut. “Cult” screenwriter Daniel Nayeri recently completed his first novel, “Another Faust,” which he wrote with his sister and will be published in 2009.
The team chose to debut “Cult” on YouTube, where it made history as the first full-length feature film to stream on the site. From there, it was picked up by REEL 13, the Saturday night short and independent film series of local PBS affiliate Thirteen. There the film will celebrate its television premier tomorrow, Aug. 23, at 11:15 p.m. The filmmakers will be at Stain Bar to tune into the broadcast with whoever wants to join. Night owls can catch a rebroadcast at 3:05 a.m. Aug. 24 or 12:30 a.m. Aug. 27.
MORE NOTES ON PEOPLE:
NEXT THURSDAY, THE CONEY ISLAND HALL OF FAME will receive new inductees in a ceremony free and open to the public. Those individuals are:
• GRANVILLE T. WOODS, an inventor and engineer who developed dozens of innovative mass transit improvements, many of which he demonstrated at Coney Island. He also invented and patented an early electric roller coaster.
• Coney pioneer WILLIAM WARD, whose family which still owns Jones Walk, making them the last of the original landowners from the 1870s. Ward was the proprietor of the block-long Ward’s Baths, Ward’s carousel, roller coaster and kiddie park, founder and president of the Bank of Coney Island, developer of the Half Moon Hotel and president of Coney Island Chamber of Commerce.
• WOODY GUTHRIE, songwriter, folksinger, activist and Coney Island resident. Guthrie lived on Mermaid Avenue for a decade and wrote many songs about the neighborhood. When he died in 1967, his ashes were spread in the ocean at Coney Island.
The ceremony will be held at the Coney Island Hall of Fame, noon, Aug. 28 at the History Center, located beneath the Cyclone Roller Coaster.
* * *
ON AUGUST 24, GREG TRUPIANO, a leading authority of Walt Whitman and founder and artistic director of Brooklyn-based Walt Whitman Project, will speak about Whitman’s influences in Fort Greene from 2 to 4 p.m. at Clinton Hill Art Gallery. To RVSP, call (718) 857-0074. The gallery is located at 154a Vanderbilt Ave. at Myrtle Ave. Space is still available.
BRIEFLY NOTED:
ARMY PVT. LESTI L. NUNEZ, a 2007 graduate of the High School For Legal Studies, has graduated from basic combat training at Fort Jackson, Columbia, S.C. . . . KTOYA P. ADAMS, class of ’09 (11203) was awarded a letter of commendation for the 2008 Spring Term at Cushing Academy, where each term, a select number of students are awarded this honor by vote of the faculty.