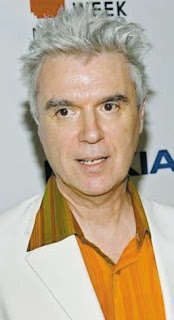 MUSICIAN, ARTIST, COMPOSER, DIRECTOR AND BIKING ENTHUSIAST DAVID BYRNE has designed nine bike racks for the city, eight of which are in Manhattan. Brooklyn’s rack — a shiny red guitar titled “Hipster” — was installed near North Sixth Street on Bedford Avenue in Williamsburg. According to the story told by the New York Times, Byrne, an avid cyclist for almost 30 years, was asked by the Department of Transportation (DOT) to help judge a bike rack design contest. He both jumped at the chance and doodled out a few designs of his own, aside from the contest, which were eagerly accepted, manufactured and installed in a short period of time. They will stand for 364 days as fully functional temporary installations.
Promoting bicycling and conducting the design contest are priorities of current transportation commissioner, JANETTE SADIK-KHAN. A study conducted by the Department of City Planning found that “lack of access to secure bike parking” is the primary reason cyclists do not ride to work.
“By bringing attractive yet functional sculptures to our streets, we are elevating the profile of cycling, and we believe that more and more people will begin to think about cycling as a mode of transportation, and not just a mode of recreation,” Sadik-Khan said in a statement.
Byrne has an artistic background, having attended the Rhode Island School of Design and the Maryland Institute College of Art for a time for before dropping out to form the Talking Heads with two other RISD students. Over the years, Byrne has widely and loosely interpreted “artist,” creating both small and large-scale original installations, such as the recent conversion of the 9,000-square-foot landmark Battery Maritime Building into a giant playable instrument. The rack designs are not a departure from the usual — Williamsburg’s guitar, a dollar sign in Wall Street, a giant heel outside Bergdorf’s — but are iconic, visible and meant to inspire use.
From the hundreds of submissions to the DOT and Cooper-Hewitt’s rack design contest (supported by Transportation Alternatives and Google — Byrne does sit on the jury), 10 finalists have been selected. The winning designs will be announced at Cooper-Hewitt during the museum’s third annual National Design Week, Oct. 19-25.
According to the DOT, New York City has about 4,700 CityRacks within the boroughs and plans to add at least 500 each year into the foreseeable future. Last spring, in an unprecedented move, the city removed three parking spaces near the Bedford Avenue “L” train station to make way for about 30 bike racks, which are usually full. Since Bedford has been declared the busiest subway station in Brooklyn, and one of the busiest in the city, many more would likely be put to use.
Follow Byrne’s adventures in wheels and music on his blog journal.davidbyrne.com.
MORE NOTES ON PEOPLE:
LONG ENDURING SINGER/ SONGWRITER NEIL DIAMOND returned to his roots as part of his current world tour, playing four shows at Madison Square Garden last week. Diamond was born and raised in Brooklyn — last week he told CBS, “Every time I come back to New York, it’s special. It’s very exciting … Brooklyn is the greatest place in the world, as far as I’m concerned.”
Diamond attended Brooklyn’s Erasmus Hall High School in the mid-’50s, and studied medicine at NYU before launching his legendary music man career. Diamond revealed that his iPod is full of Neil Diamond as he preps for performances.
* * * 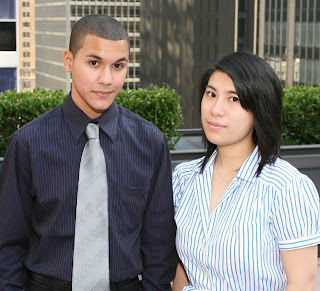 TWO CLASS OF ’08 BROOKLYNITES, GABRIEL CASTILLO and ELAINE WU, each won $2,000 scholarships for school in a competition open only to Time Warner Cable customers’ children. Castillo is a graduate of Midwood High School, where he was editor-in-chief of the school newspaper and a member of many honor societies. He was a dedicated American Red Cross volunteer, honored with a Group Fundraising Award.

While attending Staten Island Technical High School, Wu was VP of the AIDS Awareness Team, a volunteer for the Department of Health & Human Services and received the Volunteer of the Year Award for her efforts at the Jennan Medical PC.
With 28 other winners from NY and NJ, Castillo and Wu received their scholarships at an awards breakfast at the Time-Life Building.
* * *
EDDIE SITT OF MAGEN DAVID HIGH SCHOOL is one of a few area high school students, and the only one from Brooklyn, taking part in a science program at Liberty Science Center this summer. Sitt has been conducting research on advanced magnetic materials with the goal of developing an electronic box — a critical component for retrieving tiny signals from a microscope. His final product will be revealed on Aug. 23 when the students, surrounded by mentors, family and friends, present their research topics, data and conclusions. Sitt was nominated by his high school for his spot in the program.
* * *
AUTHOR AND FORMER Brooklyn Art School student SABRA MOORE will discuss her new book about the history of the women’s art movement, and her involvement with the Women’s Caucus for Art and the feminist art movement on Oct. 11, from 2 to 4 p.m. at Brooklyn Museum as part of the museum’s fall speaker series.
Her work is based on the quilt-making traditions of her East Texas grandmothers, artistic traditions of West Africa, and her 20-plus years of participation in the feminist art movements in New York City, according to the Harwood Museum of Art where her work was exhibited in 2007.
BRIEFLY NOTED:
MARIA SAVRASOVA, a recent graduate of High School Of Art and Design, has received a prestigious Illinois Institute of Technology (IIT) Camras Scholarship. Savrasova plans to study architecture at IIT … The following students were recently awarded degrees in management from the School of Management at Binghamton University, SUNY: DANIELLE F. LAMB (11203), KENNY CHEN (11204), GARY CHU (11204), KENG N. KOR (11204), MARCELA MARYNIAK (11209), JOE DENG (11223) and CLERBIE MONTILUS (11210) … Three students received an MBA in business administration: YINGHUA ZHOU (11204), ALLAN RYSIN (11230) and ANGELO SASSO (11223).