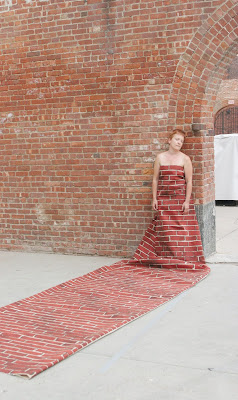 “BREAKING GROUND” IS AN INNOVATIVE annual dance extravaganza in which five renowned choreographers have five days to create a site-specific work. Each year, the location — which might be anywhere within the five boroughs — is kept tightly under wraps until the last minute, so no choreographer has an advantage. Today, it was revealed that the third “Breaking Ground” will be staged at Floyd Bennett Field!
“Breaking Ground — A Dance Charrette” is a program of Dancing in the Streets, an organization that develops free public performances to examine the history of public spaces. The knowledgeable, story-filled older men of Floyd Bennett Field were the element that so captivated choreographer and project director JOANNA HAIGOOD and executive director of Dancing AVIVA DAVIDSON as they searched for an appropriate historic site.
This year’s choreographers, Jonah Bokaer, Tania Isaac, Stephan Koplowitz, Gus Solomons Jr. and Nami Yamamoto, will be taken to the field this afternoon. Upon arriving at Hangar B, they will receive a guided tour of the site by volunteers from the Historic Aircraft Restoration Project (HARP), an effort created to preserve the aviation history of the field, and a packet of historical information. Following the orientation, each artist will receive a designated zone — and will spend the next five days creating a five-minute work for it. 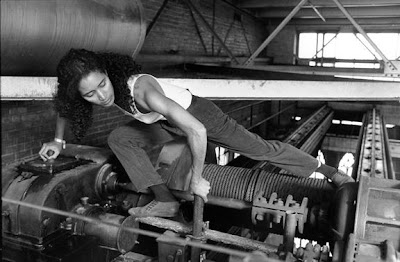 All New Yorkers, and especially Brooklynites, are invited to the free performances on Oct. 4 and 5 at 12:30 and 2:30 p.m. Audiences may stay after the performance to get a closer look at the historic planes and talk with the HARP volunteers. Free transportation will be offered to help people attend the performances. Performance location details can be obtained by calling (212) 625-3505 or visiting www.dancinginthestreets.org/wordpress/.
THE “I HEART BROOKLYN GIRLS” calendar has announced its ’09 launch party at Southpaw on Oct. 10. This year’s theme: mid-century pinup style “Women at Work,” after the fashion of Elvgren. The choice “pays homage to classic pinup while poking fun at traditional gender roles.”
The calendar project originated in ’06 with a team of friends and artists in Brooklyn’s gay community. Stores as far distant as Santa Cruz, Seattle and Atlanta will be selling the goods, and a portion of the proceeds will be donated to favorite organizations.
BROOKLYN COMPOSER ALVIN SINGLETON met with students at Brooklyn High School of the Arts last Tuesday, Sept. 23, to perform his latest work, “Brooklyn Bones.” The piece was commissioned by the Fort Greene Park Conservancy to commemorate the 100th anniversary of the 142-foot tall Prison Ship Martyrs’ Monument and the 11,500 Revolutionary War Prison Martyrs buried there. While at the school, he led a master class and coached students in rehearsals.
Born and raised in Brooklyn, Singleton has been a Fulbright Scholar and a Guggenheim fellow. His compositions have been performed by a long list of international orchestras.
ON FRIDAY, POWERHOUSE ARENA in DUMBO hosted a conversation between New York-born and raised DIANA LIND, author of “Brooklyn Modern: Architecture, Interiors & Design,” and JONATHAN BUTLER, founder of the Brownstoner blog and the Brooklyn Flea. One of the “Brooklyn Modern” essays is by Butler. The conversation centered on Brooklyn’s emerging architecture community and broadly observed “renaissance.”
BROOKLYNITE TRACY HOPKINS DECIDED to dodge the typical $28,000 wedding price tag by carefully and creatively planning her wedding. She has inspired other brides and grooms to be, those similarly put off by the thought of taking on debt for their nupitals, by writing an article carried by the Daily News. The venue: the Japanese Hill-and-Pond Garden. The reception: Madiba’s in Fort Greene. The bottom line: $4,200.
BROOKLYN NEW SCHOOL STUDENTS, parents and leaders are sadly facing the prospect that they may lose the school’s LICH-run clinic. Roughly 5 percent of the student body visits the clinic each day. The Brooklyn New School, a public school, is located on Henry Street in Carroll Gardens.
“Some of our patients don’t have health insurance, so by us being here they are able to get care free of charge where otherwise they wouldn’t be seeing anyone,” clinic nurse ALISON WOLFSON (“Dr. Abby”) told NY1. “They would have no healthcare at all.”
“Usually in my old school, it’s like you have an asthma attack and they just call your parent and you leave,” eighth grader DYASIA PEREZ told NY1. “But Abby, she actually helps you and gives medication to make sure you have what you need to be okay to go back to class.”
The school leaders have been told services will be pulled the last day of this year but parents are circulating a petition addressed to the state health department to keep the program going through the school year.
“For us, it’s just really been an inspiring example of the public school system doing something right and we hate to see that squandered,” said parent JESSICA DINEEN.
GLEASON’S GYM — “THE NATION’S OLDEST ACTIVE BOXING GYM.” — received a profile in the New York Sun this week. The 71-year-old institution, started in the Bronx but now a fixture of DUMBO, doesn’t value looks, glam or technology, but prides itself on being the real thing: a great place to train. Past clients include Muhammad Ali, Mike Tyson and Hilary Swank when training for the Oscar winning Million Dollar Baby.
Owner BRUCE SILVERGLADE points out that chain gyms are helping to interest more New Yorkers in boxing by offering intro classes. That helps Gleason’s, he says, because as people become intrigued, they are turning to gyms like his to continue the experience. Gleason’s is also a deal compared to the competition — an hour private boxing lesson goes for $35.
According to the Sun, Silverglade left a corporate job at Sears 25 years ago to become the third person ever to own the gym.
“I’m a traditionalist,” he said. “You don’t need a fancy gym to get conditioned and to train for a boxing competition.”
For more info visit www.gleasonsgym.net.