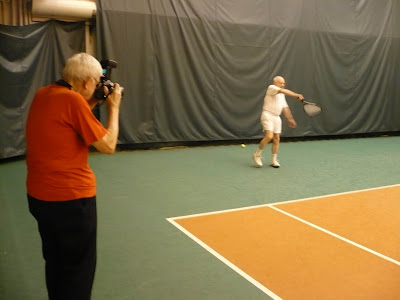 THERE MUST BE SOMETHING ABOUT the water in Brooklyn Heights (and no, we’re not talking about the river water “blowback” coming from the waterfalls). This is a story about the vitality of two Heights residents, both veterans of World War II who are nearly 90, and their inspiring encounter on a tennis court at the Heights Casino.
Recently photographer DON EVANS, 89, visited the Heights Casino on assignment to shoot photos of an unusual tennis player: BILL GUTMAN. Gutman happens to be a good enough tennis player that the Heights Casino pro told the Brooklyn Eagle, “You should watch this guy hit a ball — he’s 88 years old.” A mischievous editor thought it might be fun to send an 89-year-old photographer to do the shoot, as Evans handles a camera as well as Gutman handles a tennis racket.
Photos of the two of them together, taken by a relatively inexperienced reporter photographer, reveal that both men also look younger than their age.
“The Angel of Death has trouble hitting a moving target,” says Gutman, as his explanation for living so many long, full years. Evans obviously agrees, because he’s perpetually on the go with his camera, but he had no interest in being the subject of this story.
Gutman, a veteran and one-time business executive who has traveled around the world, moved to Brooklyn Heights 11 years ago to be closer to his son, three of his grandchildren and the tennis courts. He was following his son’s suggestion to “move while you can, before you have to.”
His relationship with tennis began in 1930 at a sleep-away summer camp. Years later, at the University of Pennsylvania, he discovered his natural affinity for squash by making it to the quarterfinals of a tournament the first time he played, earning him a spot on the Penn squad.
After Gutman graduated with a degree in chemical engineering, he went to work for DuPont in Memphis, Tenn. When the Japanese attacked Pearl Harbor he gave up his position at DuPont — and the draft deferment that went with it — to join the Navy. Following his training at M.I.T. and Bowdoin College in what was then top-secret new technology, Gutman shipped out as a radar officer on the aircraft carrier USS Langley, which was to be his home for the duration of the war. He played squash while stationed at Pearl Harbor, but after his Navy service there were no public squash courts, so he returned to tennis.
Gutman’s most memorable early Brooklyn experience was having all his wisdom teeth extracted at once at the Brooklyn Navy Yard before departing for the war.
After his service, Gutman returned to the private sector where he climbed the management ladder of J. B. Williams — maker of Aqua Velva, Williams ’Lectric Shave, Geritol, Serutan (Nature’s spelled backwards), Sominex and other products — to become vice president of operations and a consultant to the international division. Those positions allowed him to see much of the world. He was active in local civic and charitable affairs when he was not traveling to ensure that the best psillium husk supply in India was purchased to make Serutan (rather than archrival Metamucil). “My short-term memory stinks, but my long-term memory, one thing just reminds me of another,” he says of his ability to recall the past. “It’s the genes more than anything. Age is just a number, although I do believe in taking vitamins.
“I attribute my long life to my wife, Grace. We have a peaceful home. She yells at me if I do something stupid, reminds me to take stuff and do stuff. She keeps me on a narrow path.”
In February, the couple will celebrate 60 years of marriage. Their most recent trip, in January, was a 30-day cruise through the South Pacific.
“I was trying to see some of the islands I only saw on radar.”
* * *
MORE NOTES ON PEOPLE:
THE FOUNDERS OF KITCHEN FOR HIRE have decided to make their civic contribution to the upcoming election in the way they know best: by baking. PRISCILLA MADDOX, JOAN REID and RAYDA MARQUEZ have developed the “Obama Cookie” and have registered as contributors, so all proceeds of their themed cookies will go toward his campaign.
“Our kitchen is about helping entrepreneurs bring their dreams to fruition,” says Maddox. “We’d love for the Obama Campaign as well as the Democratic Party to adopt the ‘Obama Cookie’ as the official campaign cookie.”
“We know that with one bite they’ll be hooked,” joked Reid. “But really, this cookie is about change and the idea that each person has the power to make a difference.”
The “Obama Cookie” will officially launch at the kitchen, at 766 Washington Ave., on Sept. 5 at 7 p.m.
THIS WEEK, AS ST. KITTS AND NEVIS celebrate the nation’s 25th anniversary of independence from the U.K., special recognition will be given to former assemblyman and Nevis-native BERTRAM “Bert” BAKER, Brooklyn’s first black elected official.
Baker, who arrived in the US in 1915 and died 70 years later in Bed-Stuy, the neighborhood he represented, authored one of the earliest U.S. laws against race discrimination in federally funded housing, the Baker-Metcalf Act, reported the Daily News.
WILLIAMSBURG RESIDENT RICHARD TORRES was one of 21 students awarded a University Fellowship at St. Lawrence University in Canton, allowing him to pursue an independent study on campus this summer. His project was entitled “The Causes and Effects of Math Anxiety from the Third Through Fifth Grades via a Participatory Action Research Method.”
Also a past McNair Scholar, Torres is a member of the English honor society and leadership honor society Omicron Delta Kappa.
* * *
BRIEFLY NOTED:
The following students have received a degree in biological sciences from the Harpur College of Arts and Sciences at Binghamton University SUNY: XU MING YANG (11209), OLEG YEROKHN (11209), RYAN CLAYTON-COX (11212), LINFUNG VIVIEN TAM (11214), FRANK LO (11218), RONALD GOMEZ (11220), BLAIR F. GERMAIN (11224), ASHLEY BLONDER (11235) and KAMILAH S. RYAN (11236).
Two students received degrees in chemistry from the school: YAT FAN CHAU (11203) and LISA ZHOU (11204).