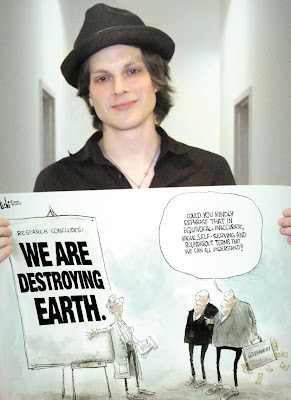 JUSTIN BILICKI of Greenpoint has been named America’s “Science Idol” after winning the Union of Concerned Scientists’ editorial cartoon contest, meant to draw attention to the growing problem of political interference in federal government science.
“It has become increasingly difficult to trust anything or anyone associated with power,” said Bilicki. “If you can simplify social and political messages, they become powerful and influential. Drawing this cartoon was my small effort at fixing this large problem.”
Bilicki, who grew up in Livonia, Mich., has long been a serious doodler. He says that while he was an “A” science student, his trick was not memorization or detailed note taking, but drawing what he learned. His first editorial cartooning gig was with the Michigan State newspaper, The State News, where he produced five cartoons per week.
“I love to draw and I’m opinionated, so it was a perfect fit,” he says. “Instead of complaining, I was given the chance to be proactive in front of a large audience and get them talking.”
He is now a senior art director at international advertising agency Avenue A/Razorfish, and the cartoons he continues to draw on the side have been carried by major publications across the country. In the annual “Science Idol: Scientific Integrity Editorial Cartoon Contest,” Bilicki’s cartoon was selected from hundreds of entries by a panel of pros, including award-winner Dave Coverly, creator of “Speed Bump” (and also from Michigan), Wiley Miller, creator of “Non Sequitur,” Kevin (KAL) Kallaugher, editorial cartoonist at the Economist, Signe Wilkinson, the Pulitzer prize-winning editorial cartoonist at the Philadelphia Daily News, and more.
Bilicki won a cash prize and a trip to Washington, D.C., and is auctioning the original watercolor cartoon print on the contest’s web page with all proceeds going to UCS. The 12 cartoons that made the top twelve in the contest will be featured in the UCS 2009 calendar, available for purchase at www.ucsusa.org/scienceidol. Bilicki’s cartoon is on the cover.
* * *
THE MYRTLE AVENUE Brooklyn Partnership (the Partnership) and NYC Housing Authority (NYCHA) collaborated over the weekend to inaugurate the partnership’s new Myrtle Avenue Public Art program. The Partnership, led by Executive Director MICHAEL BLAISE BACKER, has established the art program in an effort to bring public sculpture and creative street furniture to the 20-block retail district.
For the art project’s launch, Wiktor Szostalo and Agnieszka Gradzik, lead artists of the internationally known Tree Hugger Project, elicited community involvement to build an 11-month installation of pieces on NYCHA Ingersoll housing development grounds near Myrtle and Prince.
The pieces are in keeping with Tree Hugger’s traditional style, including a larger-than-life family of three, created from branches and natural and recycled materials, and wrapped around trees, as if hugging them. Community members contributed to the building of the Tree Hugger figures as part of Ingersoll’s annual family day celebration; the collaborative aspect is central to Szostalo’s mission.
The partnership has also launched an open call for proposals for additional temporary sculpture pieces along Myrtle Avenue and a request for sponsors to support future artists and their installations. Seed funding for the new program was provided by the Lily Auchincloss Foundation and Myrtle’s Business Improvement District.
Read more about these programs at www.myrtleavenue.org and www.treehuggerproject.com.
* * *
STUMPTOWN COFFEE ROASTERS OWNER DUANE SORENSON is planning to set up shop in Carroll Gardens — about as far away from his Portland, Ore., home base as a U-Haul can carry him and his two 1950s-era Probat roasters.
“It’s not just a business opportunity to me,” Sorenson told the New York Times. “I want to hang out, live, eat and make coffee for people in Brooklyn and New York. I love it here.”
Sorenson intends to establish a roastery in Red Hook, one shop in Carroll Gardens and another at 29th Street and Broadway in the Breslin (soon to be the Ace) Hotel.
According to the Times: “Sorenson is one of the people who have remade the coffee business, searching the world for the best beans, roasting them with exquisite attention and preparing them to order at his six cafes in Portland and Seattle, which will remain open while he is in New York. “He’s forged an outsider identity for himself and his company. He is both selective about and demanding of his wholesale customers, requiring training for anyone who will handle Stumptown’s coffee and commissioning the occasional unannounced spot check.”
BRIEFLY NOTED:
The following students were recently awarded degrees in economics from Binghamton University (SUNY): GREGORY O. BUCKS (11201), JASON CHEN (11214), KEVIN S. ROSS (11220), JU XING ZHANG (11220), DANNY WONG (11223), PIOTR EVDOKIMOV (11224), DOUGLAS GOCHFELD (11226), SUSAN WU (11228), CHENWAI CHAN (11229), JONATHAN ZATZ (11229), DEBRA LEE (11230), TIMOTHY W. KENT (11234), MARK WEISZ (11234), YEVGENIY GUTSALO (11235), ANDREW SHEYNIN (11235) and ALEX ZATURENSKIY (11235).