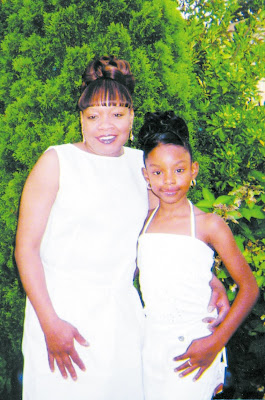 BEST FRIENDS NICOLE KELLY and CYNTHIA STODDARD have much in common, although Kelly lives in Georgia and Stoddard in Park Slope. Top priorities for both women include raising their children, living each day fully and positively, and fighting against their chronic illnesses. Although still fighting, Stoddard has begun to lose her battle.
“She’s on borrowed time,” says Kelly. “They are letting her enjoy the rest of her days with her kids at home. She’s only 37, that’s what is killing me. She has her whole life ahead of her and it [will be] cut short.”
Kelly, who has cystic fibrosis, and Stoddard, who has sickle-cell anemia, met as patients at Long Island College Hospital (LICH) when Kelly, who is five years older, became Stoddard’s babysitter. Last Thursday, the women put into action a plan to make a documentary about what it’s like to be active single moms living with chronic illnesses. Filming began with the help of Kelly’s cousin Cynthia at Stoddard’s Brooklyn home where she lives with her 14- and 16-year-old sons and cousin.
They hope to inspire others — those with and without life-threatening challenges — to stay upbeat: “We stay positive, can be an inspiration to people who take things for granted. I’m not dying, but I have an illness that’s trying to take my life every day. I want to see my daughter grow up.”
They will also use the documentary to point out a few shortcomings that, if changed, would make life easier for people like them. For example, says Kelly, if children need counseling to deal with the fact that a parent may leave them early in life, it must be paid for out of pocket. Also, there is no foundation for people over age 21 such as Make-A-Wish, which grants inspirational, life-affirming wishes to ill children.
“It’s like once you reach 21, you are the forgotten ones,” she says. “We want to make changes for the next generation, so people after us will not have to run into these problems.”
Kelly plans to fly up to New York this week to be on film with Stoddard before the small documentary team made of family and friends will follow her back to Georgia to capture Kelly’s life with 12-year-old daughter Kayla. An accomplished singer, despite her chronically liquid-filled lungs, Kelly plans to sing in the film.
Kelly, born in Flatbush, has been treated at LICH since she was 2. Cystic fibrosis causes the body to produce thick mucus that clogs the lungs and leads to life-threatening infections. Last year she was sick often, and flew to New York every three months to be treated for several weeks at a time. As she previously told the Eagle, she credits the hospital and Dr. Robert Giusti for enabling her to live beyond 37, the median age for CF patients.
“I was only the second African-American diagnosed in this hospital, at the age of 2,” she told the Eagle during a stay at LICH last year. “Everywhere else told my mom that I had bronchial asthma. If I hadn’t come here, I’m told I would have had only two months to live.”
For decades, until she developed rheumatoid arthritis, Kelly’s mother performed her daughter’s physical therapy, banging on her back three times a day to loosen mucus so it could be coughed up. Now Kayla does it.
“My daughter became my angel at age 8. She’s a godsend. I think that needs to be seen. She enjoys doing it, because it keeps me alive. That’s the gift I have in return.”
Stoddard is thinking through the best plans for her sons after she is gone. Although they would prefer to live with Stoddard’s mother, she is fighting cancer in Florida. Stoddard and Kelly are godmothers to each other’s children. “It’s overwhelming,” Kelly says.
When the film is done, they will tackle the problem of how to distribute it.
“We’re doing it. The odds are against us, but we’re doing it. Follow your dreams. I’m still trying.”