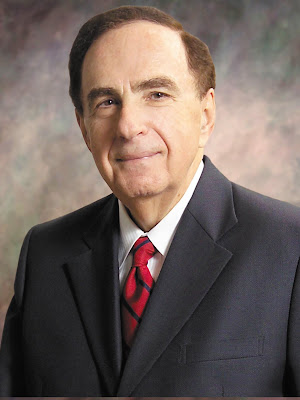 EAST NEW YORK NATIVE HAROLD M. MAURER, M.D., chancellor of the University of Nebraska Medical Center (UNMC), is one of seven people who will be inducted into the Omaha Business Hall of Fame on April 16 by the Greater Omaha Chamber of Commerce.
This is far from the first honor for a man who grew up in Brooklyn and attended Thomas Jefferson High School. A pediatric oncologist, Maurer is internationally known for his expertise in rhabdomyosarcoma, a fast-growing, highly malignant tumor that accounts for more than half of the soft tissue cancers in children. He served as principal investigator of NIH research grant awards and chaired the national Intergroup Rhabdomyosarcoma Study Group (IRSG) for 26 years. That group has been credited with raising the cure rate from 20 to 75 percent by developing a repetitive-course, multi-agent chemotherapy treatment.
After 25 years as a physician-scientist at the Medical College of Virginia, Dr. Maurer joined UNMC in 1993 as the dean of the College of Medicine. He became chancellor in 1998.
Maurer earned his undergraduate degree from New York University in 1957 and his medical degree from SUNY Downstate Medical Center, Brooklyn, in 1961.
In 2003, the Children’s Oncology Group awarded Dr. Maurer with its most prestigious honor — the Lifetime Achievement Award — recognizing his leadership and contributions to cancer research. In 2008, the National Cancer Institute recognized the work of the IRSG as one of the top 28 milestones over the past 60 years in pediatric oncology.
MORE NOTES ON PEOPLE:
MASTER SOMMELIER ROGER DAGORN, who is both an adjunct assistant professor of wine education at City Tech and the sommelier at Chanterelle restaurant, was awarded the prestigious title of Sake Samurai in an elaborate ceremony held recently in Japan.
Dagorn traveled to Kyoto to accept this honor from Japan Sake Brewers Association. The title is bestowed on only a handful of specialists outside of Japan. He is also one of only 167 individuals worldwide to be designated a master sommelier, the ultimate professional wine service credential.
The Japan Sake Brewers Association Junior Council created the Sake Samurai distinction to restore pride in the 2,000-year-old Japanese tradition. Made primarily from rice, sake is a fermented beverage brewed using a microorganism called koji and yeast and can be enjoyed either warm or chilled.
Dagorn has pioneered the introduction of fine, artisanal sakes in the west, and acts as an ambassador and educator of sake subtleties, championing the high quality selections now available in the U.S. market. At City Tech, Dagorn teaches Wine and Beverage Management, Wines of Italy, Wines of France and Wines of the New World courses.
“It is an honor to be named a Sake Samurai and recognized for what for me is a genuine and longstanding passion for sake,” Dagorn said. “Through the years, I have had the great privilege of discovering and becoming good friends with this industry’s finest producers. It is them that I would like to thank for sharing their knowledge and enthusiasm for this admirable cultural tradition.”
In an interview with Restaurant Insider magazine, he said he began pairing food with sake in addition to wine a decade ago.
“I was invited to a sake-tasting at a freelance writer’s apartment, and he had invited this small importer of quality sakes. So I was curious. I had never thought much of them, because they were just kind of ordinary. But when I tasted these sakes, they were at another level. There was a uniqueness to them, a refined character to them. Aromatics that were more distinct, some floral, some fruity, some very dry, others have sweetness to them. But there was variety. None of these had any of that petrol character to it that is common in everyday sakes.”
Later he added, “I don’t know of any other profession I could ever enjoy. Almost everybody has to work for a living, and I don’t think there is anything more fun than being a sommelier.”
Dagorn, who joined Chanterelle in 1993, has received the highest award from The James Beard Foundation for “Outstanding Wine Service,” and was named “Best Sommelier in New York” by Chefs in America, “Restaurant Wine & Spirits Professional of the Year” by Santé Magazine and “Best Sommelier” by New York Press.
“We are grateful that Roger chooses to take his day off from Chanterelle to teach with us at City Tech,” says City Tech Hospitality Management Chairperson LIZ SCHAIBLE. “It’s rare to find a person who is so talented yet so humble about his accomplishments.”
Prior to joining Chanterelle, he was the master sommelier at Tse Yang, restaurant director at l’Ecole—the restaurant of the French Culinary Institute—and the sommelier at Hotel Parker Meridien in New York.
IN BRIEF:
Brandi Vaughan (11234) has been awarded the Language and Culture Scholarship of Binghamton University for being proficient in Spanish and accepted into the study abroad program. At the same school, Jennifer L. Wong (11204) and Alina Aborovskaya (11235) were awarded Kunis Scholarships for Computing Excellence. Andrew Ahan (11204) was awarded the Birnbaum Family Scholarship. Elizabeth Balsam (11235) was awarded the university’s Judith and Seymour Ehrenberg Endowed Scholarship Grant.