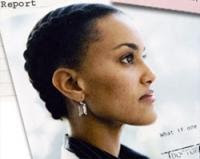 Who doesn’t love a party for a good cause? After two years of filming, and just back last month from a two-week shoot in Ethiopia, Park Slope-based Pureland Pictures, Inc. is offering a sneak peek at MEHRET — a new documentary and call to action about the alarming increase in the rate of HIV/AIDS among women.
In MEHRET, love and sex are a life-and-death struggle for the black women DR. MEHRET MANDEFRO treats. To understand why, Mehret ventures out of the hospital and into the lives of her HIV-positive patients in the South Bronx and in Ethiopia, her birthplace. Mehret’s mission takes her to the new front-lines of the AIDS crisis where she uncovers what most women don’t say about intimate relationships and the deadly risk of that silence. MEHRET is about AIDS but it is not a tragedy; it is a story of resilience, courage and activism.
Formed in 1999, Pureland Pictures is an independent, women-owned production company headed by filmmaker Emily Abt and producer Reva Goldberg. The trailer screening/benefit for MEHRET will take place September 7 at Park Slope’s Southpaw. The event will raise funds to help cover the costs of editing and distributing the feature-length film. There will be two screenings of the 10-minute film trailer, free Ethiopian cuisine, open bar, and music from the Limachips DJs, Yahzeed & Preservation, and the film’s composer, Ethiopian-American musician Tensae Berhanu. Tickets are $10 in advance at www.spsounds.com or $15 at the door.