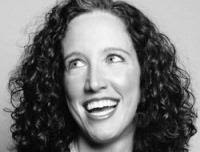 Meghan Dibble
If you’ve ever taken the R train to Union Street in Park Slope, there’s no way you could have missed the grand old Public Bath #7 building, known now as the cultural outpost Brooklyn Lyceum. MEGHAN DIBBLE, a cast member in the Lyceum’s musical drama, “A.F.R.A.I.D.,” appeared in two of the venue’s Cabaret Sundays last month.
The Cabaret series is now on hiatus, but you can still catch “A.F.R.A.I.D.,” which relates the writings of Fanny Fern, a columnist for the New York Ledger during the 1850s. The show runs most Tuesday nights through December.
In addition to theatre, film, dance and art exhibits, in the fall Brooklyn Lyceum also showcases America’s premier cultural event: College Football. The venue’s founder, Eric Richmond, says dates and times of games are posted weekly. Their tagline says it all: “Brooklyn Lyceum: Anything we want to be.”