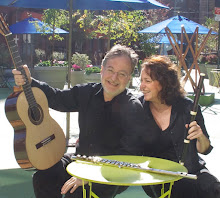 BROOKLYN HEIGHTS HUSBAND AND WIFE TEAM KATHY McDONALD and PASQUALE BIANCULLI have been making music together since 1977 when they met as students at SUNY Stony Brook. With McDonald playing flute and Bianculli guitar, they have toured throughout North America, Europe and the Caribbean, started a music festival, directed a Brooklyn ensemble, and taught their trade. Now, after 24 years of marriage, the duo has paired their mastery of technique and sensitivity to record their first album together — “Hill of Slane: Psalms, Sonatas & Sojourns.”
The cleanly and masterfully produced album has both Brooklyn and Ireland at heart. Bianculli was born and raised in Greenpoint and two of the six composers, FREDERIC HAND and ARLO McKINNON JR., are Brooklynites. McDonald has lived much of her life in the borough, and the album was recorded and produced with support from another local, JOHN KILGORE, to whose generosity and flexibility with his studio the couple attribute much of their success.
The title track, a composition by McKinnon, was inspired by the mystical site in County Meath, Ireland, where St. Patrick is said to have lit the first Paschal fire in the year 433 A.D. in defiance of the High King. McKinnon told Bianculli that when it was time for him and his group to leave the Hill after first visiting he couldn’t get up, overpowered by the energy, “as if something was holding him there.” When Bianculli and McDonald visited the site last summer during recording they were similarly overwhelmed “by its beauty and mystery.”
Theirs is the inaugural recording of McKinnon’s piece, which they committed to recording despite its unusual pace — slow enough that Bianculli found it taxing to play on an instrument incapable of holding notes. In the album’s liner notes, the couple writes: “The Hill of Slane stands as a memorial to courage. Silence in music requires a courage as well. McKinnon’s use of silence is like the white space on a painter’s canvas, defining the shapes and giving the image space.” A photo of the Hill taken by the couple graces the album’s cover.
Closer to home, McDonald is founder and director of “BaroQue Across the River,” a music ensemble that plays concerts on original instruments in historic settings in Brooklyn and NY, at places such as Wyckoff House, Lefferts House and the Brooklyn Historical Society. The ensemble teaches audiences that “listening to baroque music, such as Bach, on original instruments is really a different sound, a different experience.” The ensemble was selected for mention by the NYTimes on Monday as part of Gotham Early Music Scene’s weekend concerts at TheTimesCenter.
In 1983, Bianculli made his New York solo debut at Weill Recital Hall at Carnegie Hall. He has written two books, “101 Tips and Tricks for the Acoustic Guitar” and “Learn Folk Guitar with the Music of John Denver,” published by Cherry Lane Music. In 1999, he and friend Harris Becker, who he also met at Stony Brook, released their guitar duo CD, “Catgut Flambo.” He is adjunct professor of guitar at LIU C.W. Post Campus, guitar instructor at the United Nations International School and also teaches privately.
In 2005, McDonald and Biancullo, along with Becker, began a music festival in rural Quèbec called “Midsummer Music Dream/Songe d’été en musique” to bring together Canadian and American musicians for concerts, workshops and private instruction. The trio just celebrated the festival’s third year in August.
“Hill of Slane” will be available through the duo’s web site, www.fluteandguitarduo.com, and can be digitally downloaded from iTunes.
Photo courtesy of McDonald-Bianculli.blogspot.com