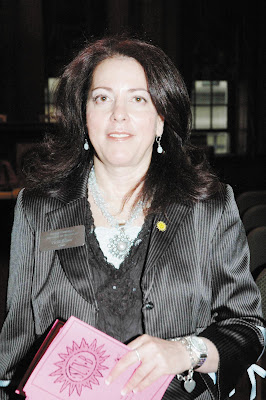 TOMORROW, SEPT. 23, THE HOPE AWARDS will pay tribute to several dozen “unsung heroes of Brooklyn” — seniors who have volunteered their time and effort to better our borough.
Hosted by SUN-B (the Senior Umbrella Network of Brooklyn), The HOPE Awards (“Honor Our Phenomenal Elders”) will recognize these individuals for their contributions at a gala event with music and food at Borough Hall.
SUN-B is an organization of professionals and affiliated community leaders who combine their services to provide an elevated quality of care. For example, representing Northfield Bank’s Bay Ridge branch is JOAN DALTON, bank VP and manager. Others are DONNA McCLELLAN of Connors and Sullivan and LOURDES BAILEY of Brooklyn Senior Care/Seniors Helping Seniors. Ellner is also director of outreach at VIP Health Services.
“Senior volunteerism is too often overlooked in our ageist society,” says VICKI ELLNER, founder and chairperson of SUN-B. “So we created the HOPE Awards to formally acknowledge and thank those who have truly made a difference with their unswerving commitment to helping others.”
“The support for this event has been extraordinary. EDWIN MENDEZ-SANTIAGO, commissioner of the NYC Department for the Aging will be joining us as a speaker and presenter,” adds ANNETTE FISHER, SUN-B board member and HOPE Awards chair. “We’re delighted to see so much enthusiasm on the part of the people of Brooklyn.”
Each honoree was nominated by a local business or organization, family or friends. Visit www.sunb.org for a complete list of honorees.
* * *
MORE NOTES ON PEOPLE:
BROOKLYN’S CELEBRATED AUTHOR JONATHAN LETHEM is trying a different kind of writing, and is, it appears, again succeeding. That would be lyric writing — a subject he touched upon in one of his novels, “You Don’t Love Me Yet.” The correlation was noted by the New York Sun in an article released the same day as the Lethem collaboration, “You Are All My People,” the first album by band I’m Not Jim.
The collaboration happened like so: band front man Walter Salas-Humara is also the front man of Silos, of which Lethem is a big fan. A few years ago Lethem stumbled upon a Silos gig in New Orleans, introduced himself, and later mailed the guitarist a copy of “Fortress of Solitude” to say thank you, making Salas-Humara an instant fan.
Lethem wrote most of the lyrics for “People’s” assortment of songs the Sun called “unusual.” He doesn’t actually perform on the album.
“Rick [Moody] is a musician; he can play,” the Boerum Hill resident said. “I’m at pains to make it clear that I’m not pretending to be that.”
The artists appeared together at a free performance at Housing Works Bookstore and Café in SoHo on Thursday.
* * *
BRIEFLY NOTED:
Air Force Airman BRANDON D. RAEBURN, a 2006 graduate of Pacific High School, has graduated from basic military training at Lackland Air Force Base, San Antonio, Texas.