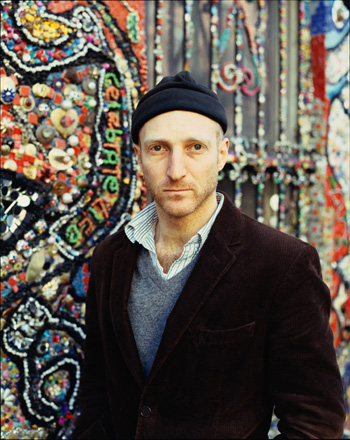 BOERUM HILL AUTHOR JONATHAN AMES has written his seventh book, a new graphic novel called “The Alcoholic,” to be published by DC Comics/Vertigo on the last day of this month. The work was illustrated by Ames’ good friend DEAN HASPIEL, who has given it a cover as distinct as those that preceeded it.
A starred Kirkus Review (given to books of “unusual merit”) in June is quite flattering: “Rarely does a collaboration produce a graphic novel of such literary and artistic merit. Ames has distinguished himself as both a novelist and an essayist/journalist with a confessional intimacy and self-deprecating humor that sometimes blurs the line between memoir and fiction. He has found his artistic match in Haspiel, who brought a revelatory new dimension to the graphic memoirs of Harvey Pekar. Here, the whole is even better than the anticipated sum of its parts.”
Illustrator Haspiel is a native New Yorker and a founder of Brooklyn’s DEEP6 Studio in Gowanus, where he now works.
The book and its creators will be touring the country to promote the book, beginning with a talk and reading at Book Court on Wednesday, Sept. 24. From there they will go to California, Iowa City, Chicago and again New York on Oct. 15, at the Barnes and Noble in Tribeca.
Two of Ames’ books, “Wake Up, Sir!” and “The Extra Man,” are in development as films. (Ames wrote the screenplays.)
His next book, a collection of fiction and non-fiction, “The Double Life is Twice As Good,” will be published by Scribner in July 2009. For more information, visit www.jonathanames.com.
NATURE AND COMMUNITY SPIRIT “blossomed” in south Williamsburg on the morning of Sept. 19 as community groups and neighborhood residents joined to welcome a new community garden, “Garden Friends of Los Sures,” to the neighborhood. The green space, at the corner of South Fourth and Hewes streets, was funded by an award from the Citizens Committee for NYC. Councilwoman Diana Reyna joins to celebrate the work of community groups in her district.
For more information about the Citizens Committee, visit www.citizensnyc.org.
* * *
LILY NG, A RESIDENT OF PACIFIC STREET, currently has a gallery show at Maimonides Cancer Center.
“We try to keep the art rotating to bring a lively variety to the cancer center. There is a large Asian community around the hospital,” says Director of Community Outreach GHISLAINE GEORGES. “Lily’s portrait of a family is quite catching. [She incorporates] bright wild colors, sharp edges.” The show will be on display through Dec. 18.
THIS YEAR, AS MARILYN LIOTA CELEBRATES her 80th birthday, Visiting Nurse Service of New York (VNSNY) celebrates its 115th year of service. This makes Liota the longest serving nurse for the largest not-for-profit home health care agency in the nation.
Throughout her decades of nursing, Marilyn has watched record-keeping technology advance from pen and paper to hand-held pen tablet computers. She’s worked through the development of most major medical practices and now helps to train new nurses in the finer points of patient care. Her philosophy is clear: “Never lose sight of the patient.” On her desk is a photo of one of her very first patients, Jennie, an elderly Italian-American immigrant who suffered from diabetes and failing vision, to remind her “of what our nurses do every day.”
Marilyn joined VNSNY at the age of 21 after graduating from Columbia University School of Nursing in ’52. Today, she leads more than 400 nurses and other clinicians who provide home health care for several thousand patients.