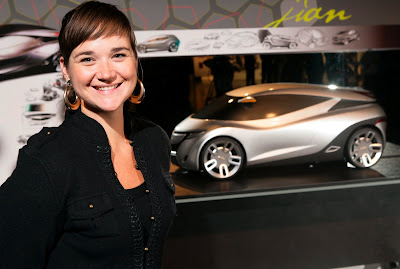 PRATT STUDENT EMILY POTTER IS ONE of a few lucky young designers who General Motors is counting on to help make the auto giant “green.” Over the summer, 21 interns from around the world were divided into six teams by skill in a designated studio — a set each of designers, sculptors, color and trim designers, engineers and graphic artists. The goal: design six vehicles that run free of gasoline.
As a Master’s of Industrial Design student, Potter contributed interior and exterior color and material strategies to two cars designed specifically for the Chinese and Russian markets for the year 2020.
“The cars were all designed using a hydrogen fuel cell propulsion system,” says Potter. “Keeping in mind that we were designing vehicles for an emerging market, we had to make sure that the materials chosen were lightweight, low-cost, ecologically friendly and technologically advanced.”
Some of those materials included bamboo polymers for the instrument panel and the floor and a carbon fiber alternative, made with no glass or mineral fibers, for parts of the interior door panel. Potter attributes her inclusion in the program to Pratt professor MARTIN SKALSKI, whose unconventional approach to 3-D form and color in his transportation class helped her to create attention-grabbing pieces for her portfolio. She thinks GM must have seen the work as fresh.
“After this summer, I am definitely interested in the automobile industry,” says Potter. “Because of the fuel crisis, I feel this would be an extremely challenging, but interesting, time to work for a company like GM. I anticipate a lot of change in the next few years in terms of the way we get around, and I think it would be a very fulfilling career … to be a part in that revolution.”
MORE NOTES ABOUT PEOPLE:
BRETT TOLLEY, AN IMMIGRANT ADVOCATE for Brooklyn’s Fifth Avenue Committee, recently joined the efforts of the borough’s Y-ACT (Youth Action Changes Things). The most remarkable aspect of this group may be that its founders are in their teens: ADRIANA MENDOZA, 15, and KARLA LOPEZ, 19. Both were frustrated into action by the fact that many city children have health problems due to bad housing conditions, according to the Cape Cod Chronicle, which wrote about the group following its recent trip to that area.
Mendoza and Lopez are working on a number of different ways to effect change. They began by visiting apartments across the boroughs, finding apartments filled with mold and roaches, flagrant use of human-harming bug spray, non-working utilities and holes in the walls. The girls created a PowerPoint presentation to deliver to the city’s Department of Health.
“Fortunately, our presentation got the city’s attention and one of the families had their apartment fixed by the department of health,” Mendoza told the Chronicle.
Over the summer, Tolley and other youth leaders met with kids from the community on Thursdays in Sunset Park, before taking them to different recreational activities.
“When I was young, I didn’t have this,” said 25-year-old youth leader KARLA SEVILLA. “It’s so cliché, but you do make a difference.”
Y-ACT is also working on a public service announcement for the “crisis” status of certain local schools, interviewing students of all ages about problems they face at school. For more information, contact Tolley at bretttolley@yahoo.com.
* * *
DANCE THEATRE ETCETERA (DTE), a community-based arts organization in Red Hook, has proudly announced that a television pilot called “Red Hook High,” produced and directed by filmmaker and DTE board member TRAC MINH VU, has been selected to premiere at the New York Television Festival’s Independent Pilot Competition. The film’s stars are all local Brooklyn teens who developed their characters in Saturday workshops at DTE’s Red Hook space.
Drawing on his interest in community-based arts, Vu developed the script for High with student actors. All filming was done on location in Red Hook, with the “enthusiastic” cooperation of local schools and businesses. DTE teachers ROBERT MARTIN and JULIA ROSENFELD assisted Vu on the pilot and coordinated the program that led to its production. All three say they would be thrilled to see the show progress beyond the pilot.
High will be screened at New World Stages, 340 West 50th St., on Sunday, Sept. 14, at 1:30 p.m., and Wednesday, Sept. 17, at 4 p.m. Visit www.nytvf.com for more information about screenings.
* * *
NEW PBS SPECIAL “THAT’S AMORE: Italian-American Favorites” will have a real Brooklyn Italian in the studio for its Sept. 8, 9 p.m., premier on WLIW. Singing legend JULIUS LaROSA will sing “Eh Cumpari,” “Domani” and his own rendition of the standard “Three Coins in the Fountain,” and will talk about his memories from the era.
Some will remember LaRosa’s time on the popular CBS TV series “Arthur Godfrey and his Friends,” on which LaRosa was dramatically fired on the air by Godfrey after almost two years on the show. That firing just followed LaRosa’s first big single, “Eh Cumpari,” and he went on to a wildly successful career. Godfrey didn’t fare so well.
The bio on LaRosa’s web site begins “Julius La Rosa is a Brooklyn boy, and don’t forget it.”
BRIEFLY NOTED:
Army Pvt. OSCAR LEE, a 2005 graduate of Midwood Night High School, has graduated from basic combat training at Fort Jackson, Columbia, S.C. … Army National Guard Pvt. LYNN A. CHARLERY, a 2001 graduate of the Linden Learning Center, has graduated from basic combat training at Fort Jackson, Columbia, S.C.
Ann Edwards (11205) was awarded a B.S. in management from Kaplan University during a commencement ceremony earlier this month at the Chicago Symphony Theatre . … The following students were recently awarded degrees in accounting from the School of Management at Binghamton Univeristy, SUNY: MING ZHONG (11223), TIFFANY PADGETT (11224), CONNIE CHIU (11229), MICHAEL NG (11229), Wilmore J. Gunthorpes (11235), Lauren Rohr (11235) and Steven Lewis (11236). From the same school, these students received degrees in management: Oddette Davis (11226), Peter Hui (11229), Ilya Radzinsky (11229), Ross Bernstein (11230), Dmitriy Frumkin (11230), Stephan A. Donk (11234), Joseph Stellano (11234), Paul T. Strenk (11234) and Jonathan Monina (11237).