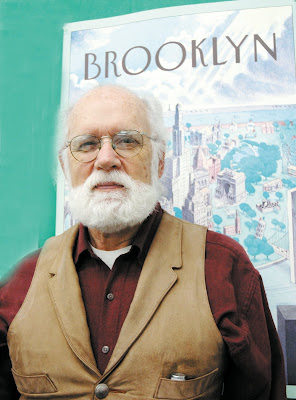 WHEN YOUR KNOWLEDGE of a subject is so prodigious that you can expound extemporaneously for hours, there is probably a book in there somewhere. Such is the case of former borough historian JOHN MANBECK, a professor, an activist in public television and, of course, a writer with many books and articles to his credit. What Brooklynites should know is that professor Manbeck has just finished two (yes, two) books about his beloved Brooklyn. They will be two of the many highlights of the upcoming Brooklyn Book Festival, on Sept. 14.
Brooklyn: Historically Speaking is a walk through time — a partial collection of the history-filled namesake column Manbeck wrote for the Brooklyn Eagle over a period of years. The entries are categorized by theme and accompanied by black and white photographs, some rare and some taken by the author.
In its quest to add a Brooklyn book to its “American Chronicles” series, Massachusetts-based History Press first approached JOY HOLLAND, of the Brooklyn Collection at the Brooklyn Library, to ask if she might know anyone qualified to write such a book. Following her referral to Manbeck, the publisher asked him, “We’d like a book on Brooklyn; have any ideas?” Manbeck actually had so many resources that he was able to complete the book in two months, and says he has enough remaining columns to write at least two more books, if the publisher gives him a green light.
Manbeck’s second new book is Historic Photos of Brooklyn, a larger coffee table-type collection of 200 archival photos, gathered by the book’s publisher, for which Manbeck wrote brief, expository captions. For some photos, the challenge was to condense a long story into a few words, and for others he had to solve mysteries about who was pictured and why it mattered with very few clues. Most photos are from the New York State Archive and the Library of Congress. Manbeck was able to complete the job in just one month because he knows “where to look and what to look for.”
“‘Historically Speaking’ was fun to write,” said Manbeck. “As a journalist, when you write under a deadline, things slip by you. Revisiting the columns was a chance to tighten the English.”
In addition to serving as borough historian from 1993 to 2002, Manbeck was a professor at Kingsborough Community College and advisor to the college’s paper. He was also advisor to the school papers at the high and junior high schools where he worked prior to Kingsborough. Journalism is a family inclination — his father worked at the Washington Post, his grandfather at the now-defunct Brooklyn Times.
Manbeck will be reading from “Historically Speaking” on Sept. 11 at the Court Street Barnes and Noble at 7 p.m., and at the Brooklyn Historical Society on Nov. 5 at 7 p.m. For the Sept. 14 book fair, Manbeck will be at BHS — one venue of the event — where he will speak at 5:30 p.m.
MORE NOTES ON PEOPLE:
COBBLE HILL HEALTH CENTER recently hosted a reception for its neighbor, Long Island College Hospital, as it celebrates its 150th year.
“Our programs enhance our residents’ quality of life and promote their ability to live within the community,” says OLGA LIPSCHITZ, CEO. “But when they need hospitalization, we turn to LICH, knowing the care they receive will always be of the highest quality.”
* * *
ON SEPTEMBER 27, BROOKLYN BOY WARREN ADLER will read from his new book Funny Boys, about “success, the mob and finding true love.” Two of his many books have been made into feature films. The reading will be at 4 p.m. in the Dweck Center of the Brooklyn Public Library Also at BPL, photographic portraits by STEVE HOFFMAN of Coney Island residents, which reflect the changes in the community over the last few years, can be seen in the Grand Lobby.
* * *
FRESH FROM A SUMMER OF SUCCESSFUL music-and-free-food laden events, Williamsburg’s Crest Hardware, led by JOSEPH FRANQUINHA, is doing its civic duty and throwing a third bash, this time with a voter registration theme. “A Night Showcasing Live Aerosol Art” will encourage political involvement, showcase three respected artists and feature a voter registration drive. The event will be held at the Crest Hardware Warehouse located at 546 Metropolitan Ave., at 7 p.m. on Sept. 13.
* * *
THE CAST OF MTV’S “THE REAL WORLD” has been spotted venturing beyond their Red Hook housing into Williamsburg. PAUL BRADY of Jaunted.com has taken up the missions of tabulating and mapping cast sightings.
BRIEFLY NOTED:
SHERRY HON of Williamsburg has graduated from Hartwick College with a B.A. in management and art history.