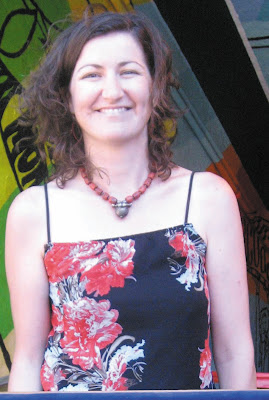 ANYONE WHO HAS EVER TAKEN a set of stairs into a New York subway station has hurried past grimy walls and other surfaces unappealing to the senses. To change that, Brooklyn-based Groundswell Community Mural Project has expanded its community mural projects to subway stations. A new mural coordinated by the not-for-profit Groundswell, titled “New York is a Roller-coaster,” was unveiled last week at a newly refurbished pedestrian subway tunnel at the 190th Street station in Washington Heights. Mayor Bloomberg’s office commissioned Groundswell to do the project, and Prospect Heights resident BELLE BENFIELD was tapped to serve as art director, as she has been creating murals in Brooklyn with Groundswell for the last five years.
A painter, muralist and curator, Benfield is a member of the Brooklyn Arts Council. She holds a B.A. in Art History from Goldsmiths College, London, and spends her time between England and Brooklyn. Her other murals are on Fourth Avenue and DeGraw Street, “Justice Everywhere”; Washington Avenue and St. Johns Place; “The Higher We Climb, the Further We Can See”; and, at P.S. 503 in Sunset Park, “Beautiful Migration.”

Led by executive director and founder AMY SANANMAN, Groundswell hopes to inspire civic involvement and ownership of the future in city youth by recruiting their participation in mural projects. Motivated by what she calls her longstanding fascination with murals, Sananman conceived of Groundswell in 1996 to bring together professional artists, grassroots organizations and communities to create murals in under-represented neighborhoods. Currently a lecturer at Pratt, she has received accolades for the development of Groundswell and its collaboration with thousands of community members to complete nearly 75 murals throughout the city, primarily in Brooklyn.
“This is one of six projects Groundswell ran this summer as a part of our Summer Leadership Institute,” said Sananman. “Through SLI, Groundswell employs 85 teens from across the city to create public art and use their creative skills to visually transform their communities.”
Mayor Bloomberg presided over the 1,150-square-foot mural’s unveiling ceremony at the entrance of the 190th Street station. The mural design, which was inspired by a poem written by one of the young participants, depicts community heroes and themes of significant relevance to Washington Heights and Inwood. The mural coincided with the revitalization of the subway’s 900-foot long tunnel, which has been cleaned and power-washed.
“Public Art has a way of transforming the landscape, creating dialogue and bringing people together, and this mural has turned an underground tunnel into a beautiful work of art that the community can be proud of,” Bloomberg said.
Visit Groundswell at www.grounds wellmural.org.
MORE NOTES ON PEOPLE: 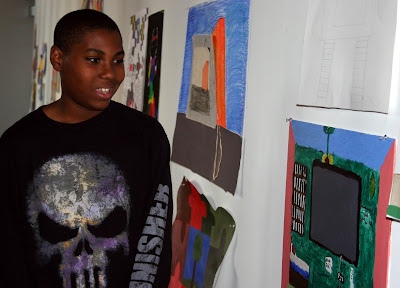 THE DUMBO ART NON-PROFIT SMACK MELLON worked with 10 young aspiring artists during the past several weeks in the inaugural season of its Summer Arts Intensive Program. Classes were held in Smack Mellon’s 6,000-square-foot gallery space, week- days throughout August. Every Friday, the group visited a different museum or other arts-related location.
Coordinated by programs manager and Cobble Hill resident JEANNE GERRITY and taught by sculpture and installation instructor SONYA BLESOFSKY of Williamsburg, the students created pieces that will be on display beginning tomorrow, Aug. 28 from 4 to 6 p.m. The gallery will also be open Friday through Sunday from noon to 6 p.m. Nearly all the participating students hail from different Brooklyn neighborhoods. Smack Mellon is located at 92 Plymouth St.
* * *
THE GALLERY PLAYERS KICKS OFF its 42nd season with a production of “The Underpants.” The Steve Martin-adapted satire will be adapted to the Brooklyn stage with direction by SETH SOLOWAY, artistic director at The Brooklyn Center for the Performing Arts. The veteran Gallery Players cast and design team will produce a limited engagement of “The Underpants” from Sept. 13 through 28 at The Gallery Players in Park Slope.
* * *
BROOKYLN NEW MEDIA ARTIST JAMES POWDERLY, founder of the innovative Graffiti Research Lab, is back home after being detained by Chinese authorities for several days last week for his involvement in a pro-Tibet protest. Powderly remained in custody last week, although according to the reports that filtered in through various online networks, he wasn’t able to project the words “Free Tibet” onto the side of prominent landmarks.
* * *
THE FOUR-SATURDAY PUBLIC SPACE experiment “Williamsburg Walks,” in which organizers blocked off a large swatch of Bedford Avenue to auto traffic, has concluded, and those organizers want to hear your compliments and constructive criticism. A public forum is scheduled for tonight, Aug. 27, at the Music Hall of Williamsburg, at 66 North Sixth St., to discuss the results. Doors open at 6 p.m. If you are not able to make it to the event, you are invited to send a detailed email to williamsburgwalks@billburg.com, care of JASON JEFFRIES and CONNIE COLVIN. Feedback will be collated into the Williamsburg Walks Final Report.
BRIEFLY NOTED:
AVERY P. SCHNEIDER, a 2005 graduate of Midwood High School, has graduated from the Army ROTC (Reserve Officer Training Corps) Leade’s Training Course at Fort Knox, Ky. Air Force Airman Robert A. Mirabal, a 1999 graduate from John Dewey High School, has graduated from basic military training at Lackland Air Force Base, San Antonio, Texas.