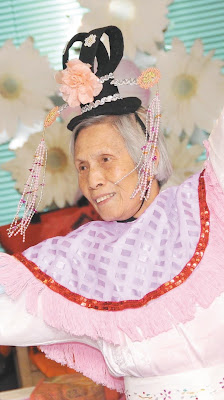 ON SEPT. 10, TWENTY CHINESE BROOKLYNITES from Metropolitan Jewish Adult Day Health Center performed a play to celebrate the Chinese Moon Festival. The seniors acted, sang and danced during the 45-minute performance depicting the legendary Chinese love story of Chang’e and Houyi. The captive audience included clients of the center, largely a Russian and Hispanic group, and the center’s staff.
The production was a collaborative effort by NICOLE TSENG, a social worker at the center, and PEIJU TU, a recreational therapist, who guided the participants through two months of rehearsals. The pair also helped the actors to design their costumes and set decorations. After the performance,, the actors and audience enjoyed a traditional Chinese meal along with customary Chinese gifts and moon cakes.
BROOKLYNITE RONALD BRONSTEIN has spent the last five years several floors below street level in projection booths around New York City. As a professional projectionist, “deprived of both sunlight and fresh circulating oxygen,” he primarily screens films for museums and arthouses, seeing an average of 600 movies a year.
This would seem to be ample background to learn what makes a good film rock and a poor film bomb. Bronstein used his observations to write and direct his first film, “Frownland,” about a struggling, dysfunctional 20-something, which has been well received by critics from major national papers in the months since its release. “Frownland,” financed by Bronstein, was shot entirely in New York City, mostly in Brooklyn, over the course of two years. He is self-distributing the film.
“I gave zero consideration to market trends or entertainment value,” he told Filmmaker Magazine. “I’d like to make films that play in theaters, but I wish those films would show more respect for the complexities of human behavior.”
The story, equal parts savage comedy and bleak drama, had been with Bronstein for years. But he wasn’t able to solidify the idea until meeting his lead actor, a Pathmark deli clerk and former suicide hotline operator, at a family funeral.
“This guy was a conduit to all my feelings about myself in my 20s,” Bronstein explained to Filmmaker. “I worked with Dore for six months to create the character, to get to the essence of the character’s dysfunction.”
“Frownland” was recently chosen as a “Critic’s Pick” by Manhola Dargis from The New York Times and was praised by Roger Ebert in the Chicago Sun-Times.
Both Harvard University and MoMA have purchased stills of the film for their collections. Producer MARC RAYBIN says, “I am tremendously honored to be part of this project.”
The next local screening will take place at BAM Rose Cinemas on Oct. 2, in the home borough of a large number of the cast and crew. (It is also has its overseas premier in France this week). Bronstein is now married to leading lady MARY WALL, and they live in Greenpoint. Leading actor DORE MANN lives in Sunset Park.
The showtimes will be 4:30, 6:50 and 9:30 p.m. Bronstein will be in attendance for the second screening for a Q&A afterwards.
BOOKSTORE ENTREPRENEUR JESSICA STOCKTON BAGNULO has piqued the attention of so many residents in her quest to provide Fort Greene with an indie bookstore that its launch tonight, Sept. 16, had to be relocated to a bigger venue. The party will now take place in the lobby of the BAM Harvey Theater at 651 Fulton St., from 7 to 9 p.m.
The kickoff, hosted by Fort Greene Indie Bookstore Initiative (FGIBI), will feature a reading by Brooklyn author COLSON WHITEHEAD. Also attending the party will be local authors JENNIFER EGAN and KATE CHRISTENSEN. Complimentary beverages and hors d’oeuvres will be served. Signed books by local authors will be given away to attendees who complete a short survey. More than a dozen local businesses have pitched in to sponsor this event in a most neighborly fashion. A few of those are Thirst Wine Merchants, Henry Holt, Soft Skull Press, Akashic Books and Brooklyn Brewery
HALLOWEEN, ALREADY? City Tech’s haunted hotel Gravesend Inn will open earlier than usual this year.
“The audience for this spooky extravaganza has increased to the point that we needed to add more dates to accommodate everyone,” says Professor DAVID SMITH, chair of City Tech’s Entertainment Technology Department.
Entertainment Technology Department students and faculty provide design, construction and operating support for this high-tech event and Theatreworks, the college’s resident theatrical troupe, produces the show and supplies the actors who, for two weeks, become Gravesend Inn’s macabre employees.
City Tech’s Haunted Hotel will be open to the general public Oct. 16 through Oct. 31 at the Voorhees Theatre, 186 Jay St. General admission is $6 per person, $4 for students with ID and parents are encouraged not to bring very young children. For further information, call (718) 260.5592 for a message or (718) 260-5588 during regular business hours, or visit www.gravesendinn.com for dates and times.