Howe’s Brooklyn: At Last, Plus Size Used and Vintage Clothes For NYC Women 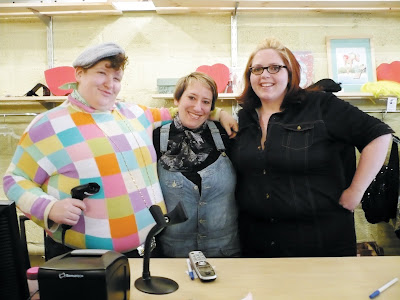 SEARCHING FOR THE RIGHT CLOTHES HAS LONG FRUSTRATED DEB MALKIN. As a plus size woman, finding something in a store that she both liked and fit was a challenge, and sometimes worse — she has been told after walking into a shop, “We don’t have anything that fits you.”

“I’ve had too many experiences like that,” she says. “I’m allergic to shopping retail. To look through an entire store and find one thing that fits, it’s totally demoralizing.”
Malkin, a Red Hook resident, has created a solution with ReDress, her new, used and vintage clothing store on Boerum Place for size 14 and up. It has the largest collection of plus size vintage clothing in the country, according to Malkin, and she encourages customers to try on everything that catches their eye in the oversized “Elizabeth Taylor-on-safari” animal print dressing rooms — because a vintage size 12 likely translates to something else today.
“Plus size women do a lot of aspirational shopping,” says Malkin. “Then they look in their closets and see things they can’t wear. I want them to walk out of here knowing they’re not going to look like everyone else.”
Shortly after ReDress opened, several women found their way up from DC, independently of one another, to purchase gowns and outfits for President Obama’s inauguration. Another customer, a size 8, snapped up several vintage dresses — because it is much easier to take in the seams of larger sizes than let out the more plentiful small vintage dresses.
“She was so excited and happy,” says Malkin.
Plus-size vintage clothing is hard to come by, partly, she says, because “designers don’t design for us.” In Manhattan vintage stores, even a size 8 woman can have a hard time finding something that fits. Plus-sized women also miss the social aspect of shopping — the “making a day of it,” bringing each other items to try on, complimenting or making suggestions — when all they can purchase are accessories.
“And Lane Bryant is great, but they have the same clothes no matter what your age,” says Malkin. “I looked very old at a young age.”
She road-tripped to thrift stores over many months to gather what has become an impressively varied collection, and waited for a long time to open ReDress until she found the right space. Inside there is room to move and relax, including a cushy lounge under a low ceiling collaged of curvy clippings. The store’s official opening night party on Feb. 4 was complete with a DJ, sexy outfits and a representative from Borough President Marty Markowitz’s office who delivered a proclamation of support.
“I love selling things, sure,” Malkin said, “but what I really love is that it’s about acceptance and self love, and finding things you can’t find anywhere else.”
ReDress welcomes consignment. Malkin only buys stain- and hole-free items, as they are needed. For more information visit www.redressnyc.com. Malkin also helped start the Fat Girl Flea Market, soon to enter its eighth year. More at fatgirlfleamarket.com.
MORE NOTES ON PEOPLE:

THE CREATIVE JUICES OF BROOKLYN’S cultural institutions extend into all facets of operations when necessary — including fundraising. Galapagos Art Space announced last week an initiative to sell $100 shares in a new show, to be produced by the art space over this summer. If the production makes it big, so might you — that’s the idea.
Galapagos Art Space Director ROBERT ELMES feels this is necessary because more than 25 percent of the once two hundred Off-Off-Broadway theaters have closed in the last five years — and notes that this coincided with an “unprecedented economic boom.”
Elmes feels that government grants and public funding counter the basic objective of art, which is to be relevant in the advancement of society, as stated on its web site. Galapagos has relied entirely on earned income for its $1 million annual budget.
In addition to part ownership of the new theater production, buyers get part ownership in a racehorse at Belmont racetrack (“We’ll go visit the horse and watch her race”), two tickets to the production with invitations to readings and rehearsals, and the opportunity to skydive with an unspecified portion of the Galapagos team.
* * *
NEIL DIAMOND, A GRADUATE OF Brooklyn’s Abraham Lincoln High School, thanked his parents as he was honored at the 19th annual MusiCares Person of the Year celebration at the Los Angeles Convention Center last Friday. According to the New York Times, he told the crowd that his parents bought him a $10 guitar when growing up in Brooklyn. Diamond said to his mother, Rose, who was in attendance: “It was a good investment, Mom.