MARCY PESNER has achieved that elusive balancing act — making a living doing something she loves with her hands. This was Pesner’s goal in establishing her Gowanus-based shop, Beagle and Pots Woodworking, formerly called Beagle Tiles. The shop initially made rare decorative wood tiles, but as interest grew, output has expanded to kitchens, built-in bookshelves and closets, office units and bathrooms. Custom order by custom order, Pesner and her small team are outfitting Brooklyn homes, almost exclusively in Park Slope, with space-saving elements in classic lines and rich hardwoods, as one of the few woodshops in the New York City area.
She and her crew can make a wall-sized installation in about 10 days, and Pesner will only work with one client at a time.
“I think it’s an atypical environment,” she says. “We honor the work we do, and the clients, and treat our employees fairly and honestly. We have a lot of repeat clients.”
Pesner’s desire to work with her hands can be traced to her childhood in Montreal, where she watched for hours with fascination as a carpenter from Luxembourg worked on many projects in her family home. She later received degrees in printmaking from Skidmore College and sculpture from Indiana University before being named the resident sculptor for Rockland County in Nyack, N.Y.
The next and final stop for Pesner was Brooklyn, where she lived and worked in Park Slope as an architectural model-maker and then as the head of model-making studio Remco Toys for 10 years. The woodshop began as a side project in 1986 as a place for weekend projects, which helped her to accomplish a gut renovation of her Park Slope apartment. However, since 2000, Pesner’s full-time job has been to bring Beagle up to speed as a full service shop, to be the answer to the question, as she puts it, “Where do we put our stuff?”
Training her staff is a special task for Pesner. She chooses not to bring experts onto the team, as she has found the dynamics don’t work well, but instead likes to train enthusiastic, fledgling woodworkers to be well rounded in their abilities. Pesner often hires Buddhist students in need of a flexible job from the Vajradhara Meditation Center, where she studies.
“I train in the old apprentice style. I think all people can benefit from learning certain skills, and woodworking is one of them.” 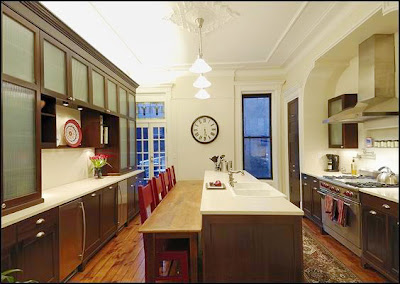 Clients have increasingly voiced an interest in those skills — especially women who work within their homes — so much so that Pesner will begin offering a one-day workshop this fall with practical information such as how to solve around-the-house problems and how to select the right tools for a job. She says that with the right information, woodwork is not all that difficult:
“Once you have the basics, you could do anything. Imagine whatever you want and you can make it.” Pesner is currently without her trademark pet, after a long lineage of beagles for which the shop is named, but there will be another of the breed in her future, to be sure. In the meantime, a Chihuahua, rat terrier and black-and-white cat are the shop’s furry sidekicks. Pesner lives in a Buddhist home in Fort Greene, where the Vajradhara Meditation Center was housed until it outgrew the building.
To see more examples of custom projects visit www.beagleandpots.com. The shop is located at 267 Douglas St. (718) 330-0921.