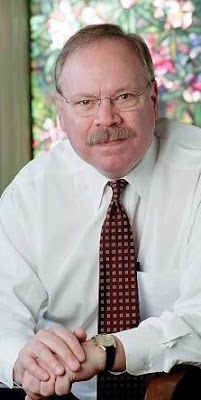 WHEN THE CUTTING-EDGE IRONDALE CENTER is welcomed at its Oct. 11 open house, a new nexus of theater and education will be introduced to the BAM Cultural District. Two weeks later, when the Irondale Ensemble Theater opens its season with “Peter Pan,” (“unlike anything you’ve ever seen unless you’ve read the book”) it will undoubtedly cause a storm of critical discussion. This is appropriate for the historic building that Irondale has chosen as home — the Lafayette Avenue Presbyterian Church (LAPC) — which can boast as much deep cultural and religious significance to Brooklyn as any of the more famous institutions born in the 19th century.
Rev. DAVID DYSON, a driving force behind LAPC’s role as a center for religion, education and social activism, notes that Irondale is just one of several tenants in the church’s 1917 parish house that has a similar mission to that of the church. Other organizations include the Audre Lorde Project, Fort Greene Parks Conservancy and Fort Greene Clinton Hill Coop Playgroup. Irondale joins them by filling the second floor. 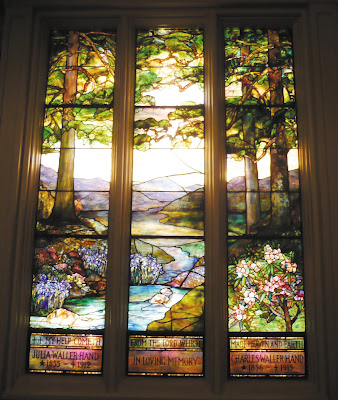 LAPC also holds some historic rarities, perhaps most importantly a composition of stained glass, “The Mirror of Creation,” commissioned by Rev. Theodore Cuyler just before the turn of the century and handcrafted by Louis Tiffany as one of a series. Called a triptych for its three panels, the scene is of Lake George in upstate New York, a sacred place for the Tiffany family.
Although Tiffany was Jewish and not a member of the congregation, he loved the scope of the church’s sanctuary and believed it lent itself to the grandeur of the piece. It is Dyson’s understanding that the church’s triptych is the original of the series, and the second is the one in the American wing of the Metropolitan Museum of Art, which was used for years as the museum’s icon on fliers and advertisements. For that reason, people often stand before the piece in the church and say, ‘I feel like I’ve seen that before.’
(Dyson also says Rev. Cuyler believed the windows were too ostentatious and extravagant for a Presbyterian church. The story goes he had to be talked into the commission, making it a controversial addition.)
The Tiffany triptych has been moved inside to the lecture hall, where it can be backlit at the flip of a switch to reveal its dramatic and stunning details. DAVID FRASER, a DUMBO-based leading restorer of glass windows (who restored the 62 stained glass windows at the Heights’ Church of St. Ann) restored seven other Tiffany glass panels at LAPC in 2006. The triptych, because it was moved inside at mid-century, is still in mint condition.
Another unusual and treasured part of the church is the sanctuary ceiling. In 1973, a 23-year-old Pratt student named HANK PRUSSING was commissioned to paint a mural of grand proportion above the upper balcony to reflect the growing multiculturalism of the community. Prussing took hundreds of Polaroids of community residents that summer, and then used the photos to paint a swirl of life onto the ceiling called “Mighty Cloud of Witnesses.” The effect is vibrant and powerful. 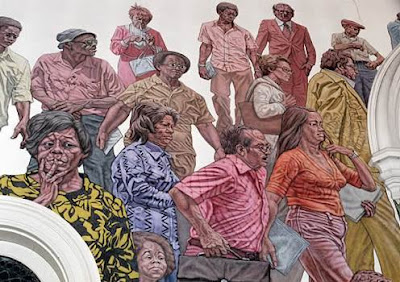 The year explains why it looks like a scene of “Jackson Five meets Brady Bunch at high noon,” says Dyson, who adds that very few people in the mural were members of the church. That was by design, to be inclusive of the neighborhood. “Hardcore Tiffany people” tend to dislike the mural, believing it detracts from the glass. However, it has an order not apparent to the casual observer, as Prussing organized sections of subjects according to the corresponding stained glass themes and colors. Prussing went on to paint murals in the United States Customs House, World Trade Center and elsewhere.
The mural is especially befitting of the church in light of its abolitionist history and long commitment to women’s and labor rights, affordable housing and community service. From its foundation, LAPC was known as the “temple of abolition.” Founding pastor Cuyler was a militant abolitionist who pressured President Lincoln incessantly for emancipation, and Dyson even found documents indicating that runaway slaves were at one time harbored in the basement. Although Lincoln declined Cuyler’s invitation to the church’s groundbreaking ceremony, he sent his son, Robert Todd, with a shovel, which today hangs in Dyson’s office.
Dyson himself was a longtime activist in the labor movement. In an interview on the church’s web site, he says, “If you read them carefully and you read them faithfully, the gospel of Jesus Christ is absolutely in sync with the highest ideals of the labor movement which is to advocate for the least, the lost and the lonely. And if there was ever the least, the lost, and the lonely in American culture, it’s the American worker, and particularly the American low-wage worker.”
As everyone agrees, the church is a great home for its newest tenant, the Irondale Ensemble Project, which has a similar mission and focus to LAPC, in terms of valuing socially progressive programs, outreach and education. Dyson points to Irondale’s work in public schools, where they teach literacy through their passionate commitment to theater outreach. The staff is mingling; Dyson calls them part of the same family.
“We are very excited to have this wild and crazy theater group with us,” says Dyson, and then he clarifies: “They are wild and crazy about serious things. They are interested and concerned about the things we are interested and concerned about. And that’s why it’s such a good fit.”