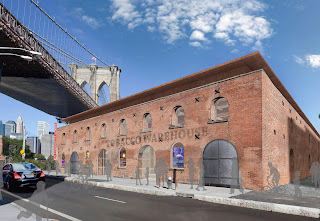 The venerable man of letters, Dr. Samuel Johnson, said in 18th century England, “Men need not be told as much as reminded…”

One interpretation is that educated people of good will know what should and shouldn’t be done, but often — human nature being what it is — they need to be reminded.

Such may be the case in the sad story of the lawsuit that has destroyed the opportunity for St. Ann’s Warehouse to renovate the open air space in the tobacco warehouse site at the edge of Brooklyn Bridge Park.

Edge of the park ?” Well, yes. One of the arguments of the lawsuit was that the tobacco warehouse was not actually on the edge but within the park, and thus could only be developed through federal park protocol. A practical argument could be made that Brooklyn Bridge Park has plenty of space — more than it knows what to do with right now — and for a well-guided rehab, like the one St. Ann’s Warehouse planned, they should just be thankful.

Indeed, Brooklyn Bridge Park management was thankful, but the ruling by federal judge Eric N. Vitaliano backed up the watchdog stance taken by the lawsuit last month. The tobacco warehouse site will now have a developer only through lengthy federal park protocols.

The St. Ann’s Warehouse plans, which are outlined below as a reminder of what the people of Brooklyn might lose, could actually succeed in the same site if the primary plaintiff in the federal lawsuit — the Brooklyn Heights Association — would drop the state level suit and support the St. Ann’s plan.

This plan, we think, would be a winner for everyone. The BHA has already shown its muscle, clout and teeth as a watchdog. Now it’s time to let go and loosen the jaws. Back off and boost a great local institution, whose founding at the Church of St. Ann & the Holy Trinity more than 25 years ago was itself devoted to a preservation cause: saving the priceless stained glass windows in one of Brooklyn’s oldest church buildings on Montague Street.

The Brooklyn Heights Association has never pretended to be a democratic organization. In fact, its strength lies in the convictions and dedication of a small cadre of very intelligent people. But were the BHA to poll its entire membership, our bet is that majority rules in favor for loosening the jaws and backing St. Ann’s Warehouse.

A powerful precedent has been illuminated and a watchdog victory won. Let’s not destroy Brooklyn’s connection to a world-class arts institution.

The following are excerpts from the St. Ann’s Warehouse response to the RFP (request for proposal) for the Tobacco Warehouse, as provided by St. Ann’s Artistic Director Susan Feldman. (Text removed or modified is indicated with brackets).

The Tobacco Warehouse will be a gateway on the Brooklyn Waterfront where community members from across the street and artists from around the world will come together to explore new possibilities for expression.

St. Ann’s Warehouse, Inc. proposes to transform the Tobacco Warehouse into a one-of-a-kind performing arts facility and community cultural center constructed within the existing perimeter walls of the 19th-century landmark shell, the new building will support the highly successful, creative and versatile approach to theater-making for which St. Ann’s Warehouse is known, as well as additional artistic, community and educational programs.

The transformed Tobacco Warehouse will be perfectly integrated within the surrounding built and natural environment. The building design by H3 Hardy Collaboration Architecture utilizes the beautiful historic walls of the Tobacco Warehouse as its principal element.
The journey from outside the theater to one’s seat will begin from New Dock Street to the south and from Brooklyn Bridge Park to the west. The sequence creates a build-up of emotion for the audiences, heightening expectation on the way to a performance. The open–air Triangle Garden will be the first part of the audience’s journey, where the building’s origins can be savored and appreciated. Upon entering, [visitors] will experience the full impact of the historic walls, deliberately left exposed. Inside the triangle, visitors will be treated to a garden, café tables and chairs, and the original archways to the park. The archways will be left open during park hours to allow flow from the park to the theater. 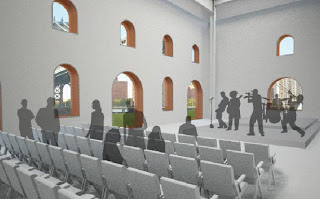 The new facility will [feature] a new flat roof set back from the existing walls and extending four feet higher to accommodate the needs of a modern theater and its related technology block most traffic noise [and] will appear as if floating above the surface of the building.
Caring for the historic walls of the Tobacco Warehouse will return St. Ann’s to its roots, when it began life 31 years ago as The St. Ann Center for Restoration and the Arts, Inc. and steward to the landmark Church of St. Ann and the Holy Trinity in Brooklyn Heights, NY. St. Ann’s will apply the same rigorous standards to preserve and re-animate the Tobacco Warehouse.
Where Global, Regional and Local Communities Converge
For over 30 years, St. Ann’s has been a home for many and varied communities which have successfully intersected and intermingled under one roof, giving voice and visibility to diverse cultures, contemporary issues and neighborhood activities. As the anchor tenant and steward of the Tobacco Warehouse, St. Ann’s will pass on this inclusive legacy [to] artists who need the open, flexible space and the producing services that St. Ann’s provides in order to stretch, both literally and figuratively, to create work found nowhere else in New York City. St. Ann’s also will continue to welcome the local community in an active, inclusive way.

Depending on mutual need, St. Ann’s works with each group to pool resources and provide experienced artistic direction, creative technical and production management, offer tailored marketing and sales expertise, and/or rental space for community events and gatherings. In other words, the business relationships are as flexible as the space.