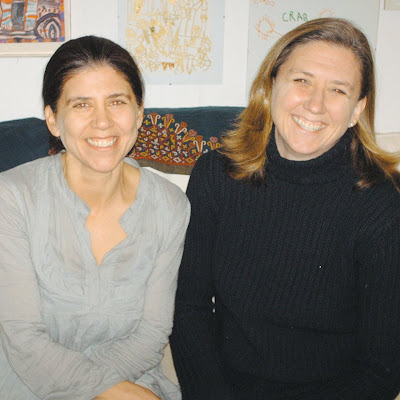 NOTHING IS SPELLBINDING in quite the same way as an exquisitely illustrated children’s book. Independently owned Enchanted Lion Books knows how to bring them to life, and does so at the rate of seven to 10 per year, each project carefully chosen by sister publishers CLAUDIA and ABIGAIL BEDRICK.
“We seek out books that are governed by an unusual sensibility, and therefore open up a window onto both the world and the inner landscape of imagination and feeling,” says Claudia. “We also look for books that have high regard for children and aim to engage their intelligence and creativity.” Red Hook-based Enchanted Lion follows two methods for acquiring fiction titles: bringing together authors and illustrators to create something new, and translating books already in print in foreign languages. Claudia has acquired books at both the Bologna Children’s Book Fair and Frankfurt Bookfair. She has also had luck finding titles through extensive online research, including The Magic Horse of Han Gan and Feeling Sad.
“I looked at the cover of Feeling Sad and fell in love,” she says — and proceeded to contact both the Dutch publisher in pursuit of U.S. rights and Sarah Verroken about her work. “I told her that I loved the pictures of pigeons that she had done, and now Enchanted Lion Books is originating Pigeon and Pigeonette, her second book. For me, this is the internet at its best.”
A quick look through the spring 2009 catalogue reveals that Verroken is not the press’s only talented artist to have illustrated multiple books. Claudia explains: “That is part of what we wanted to do. [Publishing] is so driven by the market, you don’t often see second books from the same illustrator. We make a commitment [to our illustrators] to present more than one book to our American audience, to let the depth and beauty of their work be recognized.”
While Enchanted Lion’s books are distributed to the trade by Farrar, Straus and Giroux, a division of MacMillian, Enchanted Lion handles a variety of special sales. Claudia also visits local businesses to raise awareness of their books. It’s a true family affair: when Abigail recently transitioned from marketing director to marketing consultant, mom Muriel Bedrick redoubled her publicity efforts at Enchanted Lion.
“As a small Brooklyn-based company,” Claudia says, “it behooves us to go out locally, to hand-sell our books and let our Brooklyn neighbors know what we are doing. Otherwise, lots of stores are never going to hear about us.”
Enchanted Lion was previously located in DUMBO, and before that Manhattan, when the sisters worked with their parents, Muriel and Peter. (The three women moved the company to DUMBO after Peter passed away.) When Claudia Murial and Abigail both had young children of their own, they combined their knowledge and love of the industry to start Enchanted Lion.
“In a way, things came together perfectly because Abigail wanted to work on the sales and marketing side and I was inclined to work on the editorial side,” said Claudia, who has done all the French translating herself with the exception of one book.
When the press published its first list in spring of 2003, it started with non-fiction. It published its first picture book in 2006 — Anne Herbauts’ Prince Silencio, an unusual tale about the relationship between noise and silence, told as a fairytale.
“We also have aimed to publish books that focus on unusual topics or parts of the world,” Claudia explained, “such as Tales of a Lost Kingdom, which offers several tales and a travelogue from northwest Pakistan; Tyger! Tyger!, about the physical connection and spiritual bond between humans and animals; and Mao and Me, Chen Jiang Hong’s splendidly illustrated memoir of growing up during Chairman Mao’s Cultural Revolution.”
Claudia notes that although “it does feel odd at times” to be walking to work toward the water, she can bike to the studio in five minutes.
“Brooklyn is our home, and it was our dream to become Brooklyn-based publishers,” she says. “I love being by the water and have used our amazing location to convince some of my foreign illustrators to plan trips to New York so that they can come and linger on the beautiful Red Hook waterfront.”
Keep an eye out for Enchanted Lion’s fall list, which includes the second book for each of two Brooklyn authors: Grace Chang’s “Jin Jin and Rain Wizard,” and Patrick Moore’s “Lem and Jim and the Tugboat.” (Moore’s first book was published by Henry Holt.) Although the press eagerly anticipates the launch of its web site, enchantedlionbooks.com, for now the best way to see a complete titles list is to do an advanced amazon.com search, putting ‘Enchanted Lion Books’ in the ‘publisher’ box. Claudia can be reached at enchantedlion@ gmail.com.
To look at their current catalog go to: us.macmillan.com and scroll down to Distributed Publishers.

Howe’s Brooklyn: From Travel to Teens: Author Writes What She Knows
Howe’s Brooklyn A Theater in Need: The Delicate Balance of Community-Arts Support